Home » Can You Feel It? Fall!
theplowman.org 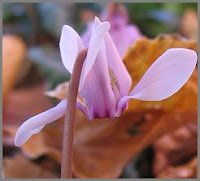 Today the breeze blew in an unmistakable feeling of fall. It is still hot, it is still humid, but there is something about the scent of air and the feeling in the atmosphere that speaks of autumn. The breezes are brisker, the grass begins to green again for its brief fall interim of a green hurrah before the frosts turn them brown.

The dry summer means that the maple trees have dropped a few prematurely browned and withered leaves- so I have raked a bit, a physical aspect in addition to the vibes of an impending autumn. I expect the tree color this year will be diminished due to the droughty conditions of this past August. But sometimes nature surprises me.

One case of this is the appearance of a little cyclamen among the lamium maculatum. I had planted the hand size corm late in the spring season- almost summer really. It had been on sale and I had wanted to replace the cyclamen stand lost to former remodeling work on that side of the house. I had several kinds then; I don’t even know what I have now* since they were unmarked… but I am glad I have them. It cheered my day to see their little blooms, not at all prepossessing, but all the more promising since I had given up hope of their survival. They tolerate dry shade, but to start out with such dry conditions doesn’t usually bode well.

It is a lesson that I never tire of observing: God’s gift of grace and life is greater than our puny expectations. The garden gives me the most inspiring lessons on that topic. Old anemone corms, lost for the winter in some out of the way place… planted in spring with no faith, no real hope that they would make it… nevertheless grew and bloomed. A pine seedling, planted carefully, but then broken by a careless child’s play, splinted and protected with a tiny wire fence…. grew into a tree now the size of a one story house! Oh me of little faith… and yet, to hope against hope, sowing seed, nurturing the broken reed of a plant. The outcomes are not always predictable, but often a blessing!

*guessing it to be ‘Cyclamen hederifolium’, or ‘neapolitanum’ as it is sometimes known, due to the bloomtime.
Technorati Tags: feelings,