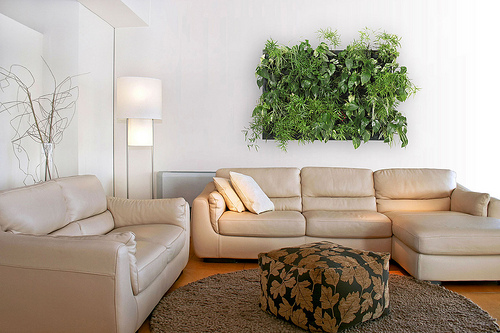 You may not think about it that way, but gardening is as much a fashion victim as home interiors. Who has avocado green appliances any more? And who admits to little circles of flowers in the front yard? Point made. Large scale landscaping follows the same track on a bigger scale, and probably over a longer time span.

Sometimes we need change, something to keep our surrounding fresh, and sometimes a certain fashion just “fits”, but as any well dressed woman knows, there is a basic well designed foundation from which to detour into some less permanent, but fun directions. Good Gardening is like that.

That said, I was first made aware of “Garden Walls” “Vertical Garden”…”Living Walls” or whatever they will finally end up being termed, at the Garden Show this year. Since then, I’ve seen the concept on sites online, so it has been around for awhile, just not on the horizon of most home gardeners. Is it a fad or something that people will incorporate into longer term use?

First, there seem to be some systems, one which looks like a wall board with cups. Another that looks like a network. Urban Gardens explains that experiment in detail, including the illustration above. It is quite technologically complicated.

Then there are large installations in France which seem to be the brainchild of Patrick Blanc. Imagine an ivy covered wall, only with variations of many greens and textures.. that will give you a crude idea of how these look.

Then there is the concept for indoor spaces. These cupped wall boards are attached to interior walls, in places where you would usually find wall art – like over the couch (pictured at the top of the post).

I wonder a number of things when I see this. If not used as a biofiltration method, or in a commercial environment for air quality, how is it better than a collection of houseplants? And what about the effects of moisture on the wall surface, etc?

Outdoors, wouldn’t it have the same challenge, requirements of daily watering, that container plants often have?

===just wanted to add a thought====
I was thinking about retro and little circles in the lawn, and although it would be a mowers nightmare, what would it look like to have a polka dot lawn? You know, little circles of the same flower dotted evenly like those fifties polka dots? I’m not advocating anything here- it just struck me as nothing more strange than the Dublin Ohio installation of giant concrete corn cobs in rows.