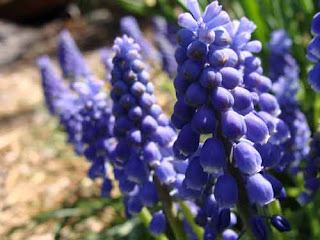 So much happened in April. The cold kept spring bloom at bay until it could be held no more, and the burst of unseasonal warmth had the unusual effect of almost everything blooming at once. Then it heated up and caused some of the daffodils and hyacinths to go by more quickly than usual. Now it has moderated a bit.

I went ahead and planted both broccoli, a bit late, and tomatoes a bit early. Yesterday I saw the farmers planting the corn, and sure enough, noticed the oak leaves. When they are the size of a mouse ear you are ready to plant corn (that is, if the ground allows for it). Dandelions sprouted everywhere the past two weeks. They close up on darker stormy days and the grass takes on an emerald demeanor, but betrays the golden presence as soon as the sun peeks out.

My vegetable gardens were tilled up, but I should have put in more seed than I did – got sidetracked with the weeding. The more of the weeds taken out in the spring, the less inundation of the overwhelming surge of summer weeds. And it is a surge.

I put in some perennials, replanting the variegated hosta undulata under the lilac bush accompanied by some hardy geraniums. I think they will make a pretty summer pair. I noticed I lost the miniature thyme I planted between the pavers. Yet, the variegated sage and some thyme made it through in the planters that I had stored in the garage, even without watering. Some unexpected loss countered by some unexpected gain. The planters went outside in their places at the end of this month. A few houseplants are allowed out, but we still can get some cold in May.

Alliums are growing strong, tulips still blooming and late daffodils holding their own. The fruit trees have bloomed well, with bees but not so many as early in the season.

All the plant places I visited have drastically reduced their inventory.

Today, the last day of April it is windy, cool, and rainy. Bringing May flowers I presume 🙂

* Research indicates that Vitamin D is very important for fighting off flu. Go garden, get some rays, and invigorate your immune system. Gardening is good for you Yes, you can sunbathe, but where is the fun (or exercise) in that?

DISCLOSURE: I may be an affiliate for products that I recommend. If you purchase those items through my links I will earn a commission. You will not pay more when buying a product through my link. Thank you, in advance for your support! Privacy Policy
« Daffodils
Time to prune Mugo pines »