Even though most trees have lost their leaves, and without a good show of color, around here… for some reason the ones who held out ( or more precisely held onto) now are showing a surprising blaze of last color. Certainly it isn’t as effective as when the trees all color en masse, but it sparks the dreary November landscape which usually is a neutral gray and beige. Early this morning as I ran off to exercise in the opening hours, there were shades of scarlet and some bright golds. One surprise as I breezed by was the beautiful golden hues of a pin oak. I didn’t think oaks ever carried off the autumn so well, but shining off by itself was the unmistakable shape of the pin oak with its pointy leaves all golden and shining in the morning light. 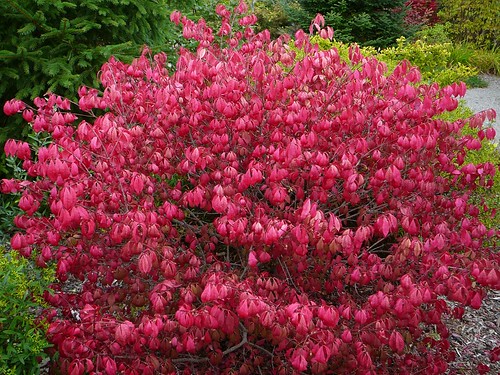 As a matter of course was the effusive red color of the euonymous elatus, or burning bush as it is commonly known. That is a shrub that is maligned nowadays. Injunctions against such plants, as that and the purple loosestrife.

The farmers are now doing their fall plowing, if they still use that method. If not, they leave the crop litter in the field, which then is heavily saturated with herbicide in the spring, called “no-till” farming. It is supposed to conserve soil, but I wonder at what cost? the older farming method around here is to turn up the ground with large clods to “mellow” through frost action over the winter. That improves the tilth of the soil. I am sure some soil erosion occurs in the windy winters without the snow cover ( which is most of the time in this part of Ohio), but it seems better than depending on chemicals, in my opinion anyway. The county officials have encouraged more of the no-till, which is probably why I’ve seen the practice increase over the past decade or so.

My grass still needs one last mowing, the horses out pasturing are seen with their cloth coats, steers are grazing, and someone put up some of their sheep for sale. With a sign just like a house or a yard sale! Come get your mighty fine sheep here.