Home » Sentiments of the Season, October

I don’t know if I end up thinking how gorgeous the days are more in spring, summer or autumn, but I know I’ve been thinking this thought a lot during the past few weeks of this autumn. I happened upon an older post about the Kigo of Japanese Haiku which celebrated late summer and started to think about what the emblems of autumn might be as I enjoy the look, smell and feel of these October days. 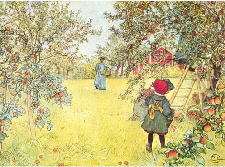 Admittedly our modern life interferes with the clarity of a seasons character. I think of the apple for our Midwestern fall instead of the Japanese fruits of persimmon or kumquats. In Japanese Kigo both apples and pears are featured, and so it would be in thoughts of our autumns. I think I have waxed exuberant over the apple at times in this blog, an apple in season is full of juice and is a thing of joy in the many dishes that feature it. It probably is influential that I have a self seeded apple tree with Macintosh type apples outside my kitchen window- thanks to the old compost pile that was once situated there.

Those are certainly part of Autumn’s voice. Grasses which grow tall along the verge of fields or in unmown roadside ditches wave gracefully with their late summer bleached flower heads and blades. They become wispy and faded to a uniform pale tan and their outlines stand out against harvested fields. They certainly are emblems of my autumns.

Oak foliage may not color well, but they are indelibly associated with fall through their nuts, the acorns. And I can’t help but jump in thought to the diligent squirrels who busy themselves gathering up all the acorns they can and provide us with new plantings when they forgot one or two of their stashes! I think those squirrels are so cute until I remember how they consume all my crocus and most of my tulips…then they take on a sinister character in my mind, but still, they are part and parcel of a picture of our autumns.

This is taken from the list of Japanese Kiyose for autumn. It is ours, as well since lately I’ve seen lots of mushrooms sprout after a very dry summer. Not as many here in my yard as those in newly constructed road boulevard dividers- where there must have been lots of compost material added.

The colors of mushrooms certainly are in harmony with the field colors of October. We don’t find the shades of neutral grays and beige until November; October is a pretty colorful month. 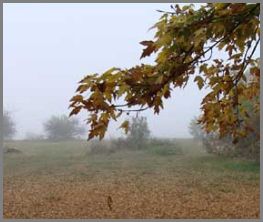 Speaking of how colorful it is in October, I think of Maple trees, whether the lemony yellow of the silver maple, the flaming crimsons and orange of the Sugar Maple, or the almost translucent vermillion of the Japanese maples or the Red maples. Maples reign during our autumns, even in less colorful years ravaged by droughts and other climate calamities.

These are some of the most obvious motifs of fall, but I almost forgot the most ubiquitous of all: bright orange pumpkins!  And all their competing relatives of gourds, and squashes, along with the variant colors of white or pink pumpkins. And Indian corn! There is an American icon for you, if you live in this part of the States, anyway.

In times past the shocks of corn in the fields, a sight only seen in Amish country now, lent an air of harvest thankfulness to the season. I don’t know if most younger kids even know what a corn shock is…. !

What else makes me reminisce of fall?

And maybe the moon is most tied to our autumns in a way it isn’t in any other season. I’m not sure why, but the Harvest Moon is depicted in almost every Halloween picture and given first place in thoughts of fall (next to foliage and pumpkin crops, of course).

Those are likely the central symbols around which I’d create an autumn vignette.

Here are more of my seasonal pictures of past autumns: