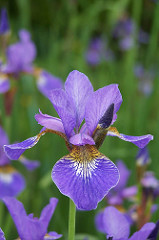 Siberian irises are one of my favorite garden plants, and they hold a sentimental value as well. Growing up, we had an impressive stand of a deep purple variety that I believe was “Caesar’s Brother” that old centurion of perennial gardens.

For me, they were something out of the Japanese prints my father was partial to, and my mother mistakenly called them “Japanese iris”, but I now know them by their proper name, Iris siberica. No self-respecting Japanese iris, Iris ensata, would have survived in the somewhat dry and partly shady garden near a garage and competing with tree roots. But the Siberian soldiered on and thrived through cold snow and frozen winters, droughty summers, and all the Midwest climate could throw at them.

As is true of these sturdy and dependable plants, they grew in part shade, and never needed special care, although they were watered and fed along with the rest of that part of the garden. All the more amazing since they grew in the vicinity of the Black Walnut trees roots. Usually that spells the demise of many garden flowers, but the Siberian iris clump did not seem to mind.

It is the beautiful and graceful flowers that I love, however. I especially like the blues, and have a favorite that isn’t commonly listed in the catalogs, ‘Sea Shadows’. They are a striking, healthy, and graceful plant with loads of blue flowers that have a cloudy blue variation with some golden markings at the the throat.

The variety ‘Butter and Sugar’ are as sweet as their name, but took much longer to establish and are shorter and generally less vigorous than their purple and blue brethren. Still, very pretty and elegant in a very soft pastel coloration. I think the other variety I have is ‘Ruffled Velvet’ which is a reddish purple and very free-blooming. It has survived neglect and gives a good show of flowers every year. 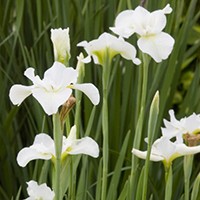 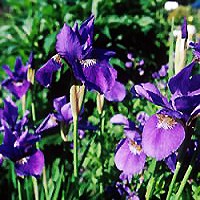 The slender leaves, thin straps of mid-green, and the delicate looking flowers floating in butterfly clouds give a beautiful scene in early June. They are hardy in zones 4-10, like some moisture, although when established they are very tolerant of a dry garden.

Their colors mix well, nothing strident or harsh, and they bloom with the June flush of roses, Shasta daisies, and campanulas. I think they would be beautiful with some of the ornamental grasses in proximity. Golden sedges at their feet, and Maiden grass at their back.