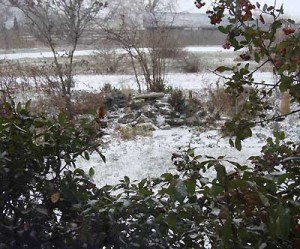 Looking for a Sunset Bird in Winter
by Robert Frost

The west was getting out of gold,
The breath of air had died of cold,
When shoeing home across the white,
I thought I saw a bird alight.
In summer when I passed the place
I had to stop and lift my face;
A bird with an angelic gift
Was singing in it sweet and swift.
No bird was singing in it now.
A single leaf was on a bough,
And that was all there was to see
In going twice around the tree.
From my advantage on a hill
I judged that such a crystal chill
Was only adding frost to snow
As gilt to gold that wouldn’t show.
A brush had left a crooked stroke
Of what was either cloud or smoke
From north to south across the blue;
A piercing little star was through.
~~~~~~~~~//~~~~~~~~~~

THIS saying good-by on the edge of the dark
And cold to an orchard so young in the bark
Reminds me of all that can happen to harm
An orchard away at the end of the farm
All winter, cut off by a hill from the house.
I don’t want it girdled by rabbit and mouse,
I don’t want it dreamily nibbled for browse
By deer, and I don’t want it budded by grouse.

DISCLOSURE: I may be an affiliate for products that I recommend. If you purchase those items through my links I will earn a commission. You will not pay more when buying a product through my link. Thank you, in advance for your support! Privacy Policy
« Plotting out the Year
A Little Magic in the Garden »