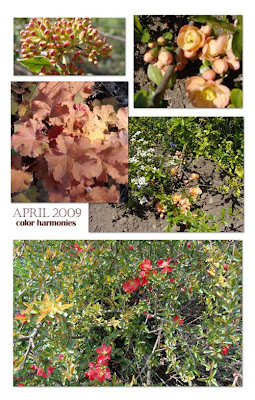 Here are a few of the photos I took this past week of what is blooming in my yard. I chose those with apricot and orange to orange red colorations to show you how pretty some things could be together.

One thing blooming which is not included, but could be, is the Hyacinth “Gypsy Queen”. It has to be recued from the overwhelming shadow and stems of the ‘Therese Bugnet’ rose. I think I will move those remaining over by the Caramel Heuchera since they would look so pretty together.

The large photo at the bottom is Texas Scarlet quince (Chaenomeles) and the creamy apricot quince in the upper right is ‘Cameo’. the upper left photo is of the Burkwoodii Viburnum in bud. Because this bush is so large and holds its blooms up in the air, it probably would not pick up the harmony of the Heuchera leaves as well in the garden as it does in a photo collage.

I don’t really like the opaque white of the candytuft paired with the ‘Cameo’ blooms in the middle picture. that is a tough white to pair up with soft colors- it creates an arresting picture with the most saturated reds or yellows.

Lady’s Mantle would look much prettier there… I think I will transfer the Iberis out and the Alchemilla in.

Fairly easy to do this time of year.

DISCLOSURE: I may be an affiliate for products that I recommend. If you purchase those items through my links I will earn a commission. You will not pay more when buying a product through my link. Thank you, in advance for your support! Privacy Policy
« Helping Your Honeybees
Fickle Weather »