Home » Canadian Thistles, Are They the Bane of your Garden?

I don’t know anyone who says they like this plant. We all call it a weed, and doggedly work to eradicate it from our yards. That has been one of my occupations of late, and I find there is something of an art to ridding the garden of Cirsium arvense, as horticultural Latin nomenclature labels it.

What makes Cirsium arvense so difficult- that it tempts even a saint to utter unrepeatable words? It spreads like crazy, both by root and by seed. Another characteristic is that it has is a deep taproot which can grow down 10 feet or more [1]. I’ve not experienced any growing that deep in my yard, but who knows, really? They are tenacious, I will tell you that. 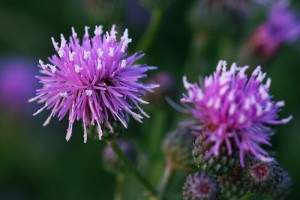 Two other words used to describe this thistle are “rhizomatous”and “perennial”. Rhizomatous means: “a rootlike subterranean stem, commonly horizontal in position, that usually produces roots below and sends up shoots progressively from the upper surface.” In other words, it creeps underground and that means it voraciously takes up ground spreading ever outward. Probably faster than you can say “Dag nabbit”. And most of us know that “perennial” means it promises to come back, year after year. But none of us want it to…

The roots are not the only means by which you get bumper crops of this weed. It has flying seeds.  With a tuft of silky hairs, the seeds are equipped to fly, but apparently none of them get very far from the mother plant; you might think this is a good thing, but I warrant not. For one thing you just don’t want the blossom to mature to the seed stage at all, since the seeds remain viable for about three to six years. That is a long time to be having unwanted seedlings sprout.

Then there is the fact that plants of the same kind growing together seem to produce some sort of synergism. This may be garden legend, but I always notice that single plants are much less vigorous getting started than when there are at least three of a kind.

The Good, Bad, and Ugly

Now that I have given Canadian Thistles their criminal profile, what about their good characteristics?

Perhaps you don’t love the Goldfinch as much as I do, but knowing that thistles are important to their survival and wellbeing ameliorates the noxious effects of them as weeds in my garden.

The Art of Weeding

One thing that should be remembered with this particular weed: it stores food in its roots …so the more you weaken them, the better chance of really getting rid of them. One method of weakening these thistles is to weed when they come to flower, like now in July. The plant sends its energy into the making of flowers and eventually seed, which means the roots are busy giving up their strength. Just don’t let it get to the seed stage, if possible.

Mowing down the thistle will also weaken it, as will competition from grasses and alfalfa, too. If your ground is dry, it will be hard work to pull those plants from the ground, but I have found that after some rain, they pull right up with much less effort.

When hand weeding, patient and consistent effort is best. It is almost worse to half-heartedly snap off the tops or dig out less than the full root. The type of long weeding tool like a dandelion knife is useful, and loosening the ground with a fork further helps. 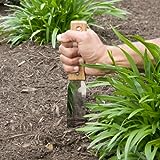 Just keep at it, and eventually you can win in war of the weeds.

The Canadian Thistle In Ohio