Saturday night gave the first hard frost, and Sunday afternoon was sunny and perfectly autumn, so the family packed up and went to Conkle’s Hollow for the day. Usually we spend our time in Old Man’s Cave in the same area, but decided to try the more challenging hike (though shorter) in this less “improved” area of Hocking Hills.

There was quite a crowd in the parking lot when we arrived, and even more in the Old Man’s Cave area when we drove by there. A nice Sunday afternoon during mid October is everyone’s idea of a day trip to see fall leaves and hike the hills, it seems.

And it was beautiful.

Conkle’s Hollow has trails that can be dangerous and the beginning trek up is steep. I was winded. We had forgotten the hiking sticks, so my husband found a suitable substitute and that helped tremendously. While the climb is much higher, and the landscape has similarities, it doesn’t have the Lord of the Rings vibe that you experience in the gorge and trails of Old Man’s Cave. I did love the panoramic views once I got used to the trail on the edge of the world, and death defying trekking on a literal rim. 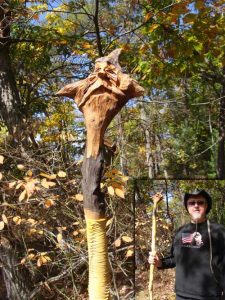 We didn’t quite make the full technicolor autumn display that this area is known for, but there was enough color and that nice bite to the air that made it an ideal day trip. I took pictures, but had to pass up the best of the ones on the road- there aren’t alot of opportunities to stop and although I opened up the moon roof- it didn’t help and we pulled over for a shot or two of decidedly second best scenes. My mind’s eye gets all the #1’s.

In some small ways the walk along such a trail reminds me of the Hana Highway drive in Maui: paths/roads on the edge of hair raising heights, polite waits for one way while trekkers coming the other way pass carefully. 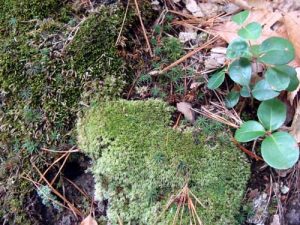 I could take all day inspecting the mosses.

It was just the right amount of walking, and the climb down the very steep incline was negotiated with steps. Next time, though, I think I should have actual hiking boots instead of my tennis shoes. It would give better traction on the damp wooden steps and on the bare stone places. The trail walk was only 2.5 miles, but it was plenty of a work-out for me. 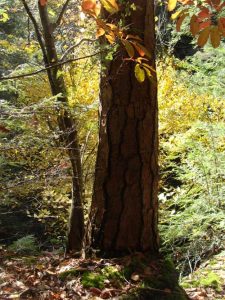 A tree on the edge. 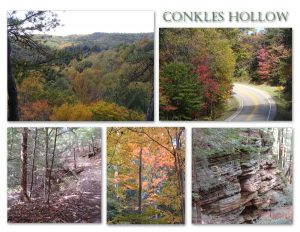 Then it was home…

We had to stop for some of the famous Laurelville cider, and on a whim, gave the Renicks Farm Market a quick visit, too. Acres of pumpkins, and we took away some goat milk’s fudge, blackberry cobbler bread, and some blackberry butter. The kids got their penny (in name only) candy. Noticed that Circleville was setting up for their famous Pumpkin Festival which takes place next week.

Hopefully I’ll be up to doing some garden cleanup tomorrow- it is overdue. AND I bought about 100 tulip bulbs that I need to plant. I always tell myself: I’ll be happy I did that next spring;)