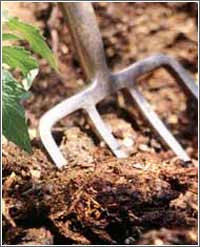 …Which led me to thinking about mulches. That is the topic for today’s post.

Just thought I would use this as a jump-off for talking a bit about mulches. In years such as this, with unusual amounts of moisture, it might be wise to use less, but normally mulch is needed for several reasons.

I don’t use this stuff myself, and it is not readily available in the North for some reason, but my sister in Tennessee used some. I dislike the smell.

I suppose for those who are making choices they may want to keep in mind its poisonous qualities for the neighbors dogs. Unless of course you have a vendetta against a particularly yappy and digiferous dog. I’m kidding. I’m KIDDING!

Presently we use cypress mulch, but I am not particularly enamored with the look of it. But it does the job at a reasonable price. I have a little short cut I use for mulching. Used Newspapers. Yep, recycling at it s best. I only use this under ornamental plantings, since you have to be careful of the inks used leaching into the ground if you are growing food. But most newsprints with regular black inks are fine for ornamentals. The method is to put thick blocks of paper down and then cover it with the bark mulch. It causes the mulch to last longer and it suffocates the weeds better. It is also an answer to ridding oneself of stacks of newspapers.

My favorite is pine bark, but we don’t use it much, ever since I read that more insects and diseases are piggy-backed into the garden with this type. I don’t know if that is true, but cypress is more insect repellent. I absolutely love the smell of pine, though. I like to camp in pine woods, and walk under the soft quietness of pines. It is cathedral-like as often described. With its own form of incense. The use of pine bark mulch has a reminder of that fragrance.

There are different choices and theories on when to apply the new mulch. Some feel it attracts rodents to apply it too soon in the fall. Some feel it encourages bulbs to sprout prematurely. I often wait until after Christmas, but last year was caught short by that. This year I will put it on through the fall as I have time and money. That seems to be the wise thing to do, since we are predicted to have a snowy and very cold winter.

For much more information on mulch: Mulching is an important method for both water conservation and weed control. Mulch for Moisture
=====
Today I saw one of my crabapple trees is re-blooming. It is full of fruit (lost its leaves awhile ago due to fungal disease) and now has a sprinkling of blossoms. Sweet, but oddly out of season.
← Previous Post
Not going to garden, just opinionate
Next Post →
October Day in the Life