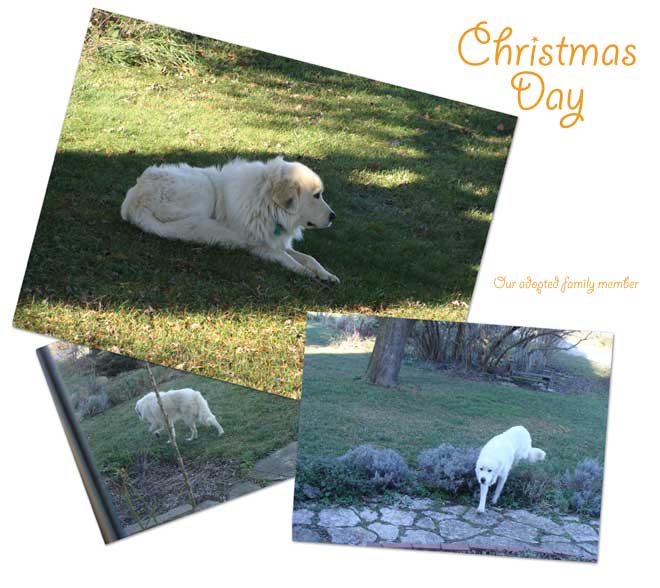 Everyone who doesn’t blog for awhile has apologies and excuses. I did really intend to post more, and get some of those photos of America from our trip into a blogpost or two, but life keeps intervening. Or something like that.

Anyway, the “Dog Troubles” story is too long for Facebook status so I decided to write a post here.

It does have a little to do with gardening, since we put up a long stretch of fencing to try to corral our dog and now are thinking about stringing electric fence too- although I didn’t like the idea of that.
updated to add details: what collars? He slips regular collars that seem tight enough, the harness collar lay empty; the kennel enclosure of the largest size and covered with tarp is climbed out of; garage windows bent outwards; outbuilding wooden doors chewed to bits.
Here is my story… of my dog and why I don’t seem to be writing anything except the most impersonal of posts elsewhere. I am kind of upset.

Some of you know about my Christmas dog- the stray Great Pyrenees that showed up around this time last year. Here is the picture and post. He settled down some, although he escapes every known collar and enclosure known to man. He had taken to mostly sitting on the porch and in the front yard… which was perfectly acceptable, though he did like to take off at times during the day. This breed is notorious for being stubborn and loving to roam a radius of one to two miles according to general info. Anyway, our adopted dog seemed much happier, and would come to us, although not on command, and all seemed well. I grew very attached to him, because this is the type of dog I like, very calm and dignified, normally. Except during thunderstorms.

Well, some of the trouble started not long after we returned from vacation, although he was fine with my daughter caring for him every day during that time. He seemed to get sick, so we took him to the Vet and nothing seemed wrong except his weight was down. He won’t eat when anything bothers him… So we spent extra attention on him, fed him his favorite food, and he seemed to perk up and get back to normal after about a week and a half.

Then the strange stuff happened.

As some might know, (if you are reading my facebook status) our dog went missing. I had just about given up after both my husband and I had looked and made inquiries. Then we got a call from the humane society. They had him, and gave him shots (although he just had them the week before disappearing, though they didn’t know that), and told us the story that some white van had shoved him out in an area in the next county.

That was strange, but we were glad to get our dog back, Now he was in the same state as when we first found him: scared, cowed, depressed. We took him for a walk, cajoled him into eating, closed him up for the night. He escaped through the garage window after trashing the garage. I don’t know how.

We went to the same place (another farmplace with a Great Pyrenees) and picked him up from them. Same story: white van had dropped him off in the area, which is a good ten miles from us. Now doesn’t that seem strange? Yeah.

He goes missing a third time. This time we know where to look and sure enough, with the same white van story.

Who is this mysterious white van? Why would they do this? Throw a dog out in the next county?! The dog is scared out of his wits, chews or digs his way out of every possible enclosure, and we haven’t had time to get electric fence. My husband has now blown his gaskets and I can’t reasonably say let’s give the dog another chance, although he has been happy on our front porch for the past day (I give him his doggie treats, there). By rights, it isn’t even the dog’s fault if someone is hauling him off and dumping him.

Anyway,I feel a bit wrung out and sad. Running all over the county, My husband talking talking with the nice, dog-loving sheriff, talking with the lady whose house seems to be the magnet for this dog, and not having a CLUE why someone would be doing this.

What would you do? The dog needed special care to calm down and it took months, now it seems we are back to square one and the focus of someone’s idea of a cruel joke or their solution to something I don’t even have any idea about.

My life is becoming some weird soap drama, and that is just with the dog…. we aren’t even going to mention people.