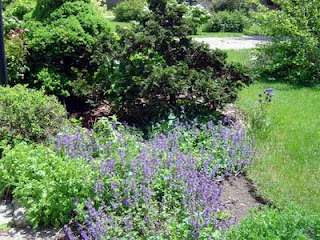 I’ve been a long time in this present garden, now. Long enough to reckon with mature plant sizes and the times I broke the rules on proper spacing.

There are a few situations that I truly rue not paying attention to height and spread, and in one I was taken by surprise. I had planted a white flowering fringe tree in one of my island beds. It did very well and I decided I would like to rim the driveway with them. The idea of having white flowering shrubs in combination with them was something to add (in my minds eye) some symmetry to a very asymmetrical entry to the property. Nothing seemed to look right and it was very challenging to work out.

The Fringe tree in some respects is just a large shrub itself. The viburnums either love it here, or generally are shrubs that get to be the size of small ornamental trees.

Unfortunately this is not a bright success story. So this is an illustrative tale of what not to do.

Not completely a failure either, but a live and learn situation that I am managing. Fringe trees were found and planted. They turned out to have different size and form from one another.. none were as happy, in the more demanding soil conditions, as my original Fringe tree. I put viburnum mariesii in close proximity to each tree. It didn’t take too long of a time lapse to find that was mistake #1. The viburnum grows much faster and swamped the trees. I have to keep pruning the viburnums back. The V.mariesii take space…lots of horizontal space.

I had purchased four quince bushes which were supposed to be white flowering varieties. BZZZT. They seem to be “Texas Scarlet”. Not a bad thing in itself, since that means they were more compact and have a pretty bloom…but they weren’t white. Those were on the outskirts of the quadrangle sort of plan, so their spacing was better. I’ve toyed with the idea of moving the Viburnums to a freer ( non-prune) environment, but as I age I find I am very adverse to having to lift and move large size bushes.

My trees in general are decently spaced, but I had put in a number in the front that I am not sure are going to completely survive without some culling at some point. Can’t tell yet. But the only ones I worry a bit about are the two dwarf evergreens which I knew were too close, but did it anyway, for some reason I find arcane at this point. Of the two, the hinoki cypress is the more valuable and will have pride of place. The Alberta spruce will be moved it if needs to be. Right now they are bosom buddies. That is their picture above.

So the moral of my story is: pay attention, close attention, to the height and spread of trees and shrubs. Perennials not so much.