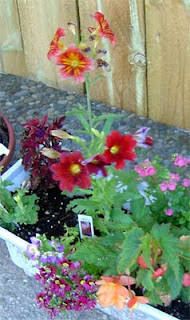 Dear Friends…do try your hand at the Garden Haiku, and in the meantime I will attempt to follow Mr.Mcgregor’s Daughter invitation to a meme she proposed in July. For me this is the time for this meme which asks for a recount of this years best and worst annuals.
Of course I will tweak it a bit and add my surprises.
Like the fact that I had some odd rogue salpiglossis which somehow wintered through and took root under a fenceline. I didn’t know they could do that- it makes me desire plenty of seed for next year, knowing that it will come through and reseed itself.

I love the look of salpiglossis- they are fantasy glass in a bloom.

Ageratum did best midsummer- and provided the much wanted periwinkle blue at the front walkway.

Reseeding bronze fennel was a triumph in all weather. It likes it here. Maybe a bit too well.

Sweet peas failed this year- which is a terrible shame because the cooler temperatures would have suited them to perfection had the seeds ever sprouted.

Lobelia either failed or struggled on through. Some years are like that. Containers always have the worst problem with lobelia for me – I should always put them in the ground. Inconsistent watering is likely my problem with that.

Yellow petunia struggled and was finally swamped by the purple vining sweet potato.

Fragrant stock – another over winter surprise came up in a planter and bloomed beautifully.

Larkspurs in deep blue are a success.wondered at the beginning of the season. Still wondered in July, but are beautiful right now.

Impatiens, the New Zealand type was a huge ( literally) success in a large planter in the shade.

DISCLOSURE: I may be an affiliate for products that I recommend. If you purchase those items through my links I will earn a commission. You will not pay more when buying a product through my link. Thank you, in advance for your support! Privacy Policy
« Garden Maturity
Best In Season »