Home » I beg to differ,Stu: or Watering Time Matters 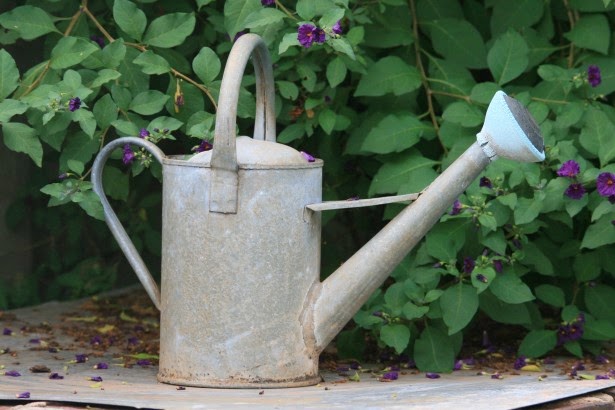 In his post of October 23rd, Stuart of Gardening Tips ‘n Ideas argues why watering times don’t matter, but prevailing advice and my experience argues the contrary: it most certainly does matter. Here’s why:
First,this:

if you water your plants in the morning then they will have time to dry out before nightfall. For at evening, once the sun has set, plants are unable to deal with water around their roots and become susceptible to all manner of fungal diseases. Really?
….

Now, if this were a true statement then shouldn’t we be covering our plants when it rains during the night? And how many of us gardeners have had plants wilt and die from fungal root diseases after enduring months of rainy days and evenings? I’ll hazard a guess at none.-Stuart

Wrong guess, Stu. I have had problems with this, sometimes through fault of my own (not having good garden practice), but mostly through weather conditions. Fungal disease is due more to a combination of problems, rather just one of watering. And then the the bacterial ones, which really are the worse I think, appear as Stuart said.

Dreaded things like Crown rot, where your nice little plant looks ok until you lift it clear from it’s roots…and find a dead unrecoverable plant. Blackspot of roses… wilts, rusts, all sorts of ugly words appear when the watering situations go awry along with warm humid conditions (something every Ohio gardener contends with every growing season), and cool nights. Watering not only at the right time, but in the right way minimizes the chance of developing plant disease. Minimize is the operative word, here. Sometimes it is “gonna get you” anyway. But fungal disease like mildew does grow more often under practices that cause the plant to be wet during prime growth conditions. Here, in August, when humidity in the air is oppressive and temperatures stay high- mildew often appears on lilacs and zinnias, especially. I guess it is a matter of a tipping point.

Plants tolerate less than ideal conditions for a period of time, but after that they succumb. Here, where we have ponding, a field can stay immersed for a certain amount of days and still recover, but then each day it prolongs increases loss of the plant through root rot or lack of oxygen. Oxygen lack will kill first, root problems appear if the weather turns hot. In winter the wetness at the root will kill more often than the actual cold will, depending on the susceptibility of the plant, but that is a drainage problem. Stu is absolutely right in putting that first on the list of plant killers.
Here ‘s a link to a rundown of many of the fungal culprits

To me, it doesn’t matter if the watering practice causes a fungal or a bacterial disease, or drainage problems, but that -either way- I lose a good plant. So watering at the right times and trying not to splash the leaves at the wrong times of day, or whatever preventive practice avoids the problem… is worth it.

And the malefactor is not the time of watering but is instead – poor drainage.-Stuart

Very true.
Actually, though, I’d say that is an additional problem that causes other difficulties in the plantings, mainly suffocating them. Quick and obvious death. No lingering along and promising recovery for that problem!

enjoy the liberty of watering either first thing in the morning or last thing at night.

Those are the best times to water- it is midday that is the poor watering time. Midday watering brings on more disease, and loses the good effect of moisture due to evaporation, but morning time reduces the stress the plant is likely to have from the dryness and heat from the day. Stressing a plant leads to more disease, because they are then less resistant to the attack.
An example is canker.

Canker diseases are fungal, and commonly attack plants weakened by drought, root disturbance or poor root environment. Cankers kill bark and underlying tissue in patches on branches and stems. The bark splits as it dries and is easily removed, exposing the wood below. Fruiting bodies from the fungus are often seen on the dead bark areas.-Gardener’s Handbook

So, you can see it is the combination of factors, not simply one that opens the plant to attack from a disease.

The best way to water is with a good soak at the roots, deep and targeted watering. And keeping the plant from stress and injury.

The determination? Wise Geek had it right on this one:

“As a general rule, watering should be deep and infrequent, as this helps plants to establish a strong root system. However, the time of day that gardeners water the garden is also important.

“Fungal infections can colonize leaves which are left moist overnight, and roots will also suffer from being watered in the late evening. Being left moist and cold at night can lead to rot and fungal infections of plant roots, an undesired result.”-Wisegeek

It is the addition of coolness at night that creates some of the fungal environment. But if the conditions are dry enough, night soaking shouldn’t be a problem. You have to fine tune it for yourself. Maybe that is why gardening is as much an art as a science.
Complex stuff, this gardening, isn’t it?