Home » I took a Blog Vacation 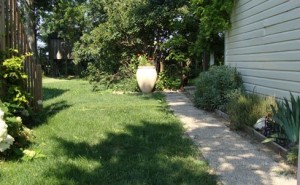 I am in the 900 block of posts right now, 903 to be exact, and I made the first experimental blogpost on September 9th in 2003. Those were the days when I might post two or three things a day… in a freeform sort of way. The first one with any real content was later that day, I called it “OK” because half the time the blogposts weren’t titled. And I didn’t use photos or pictures hardly ever.

So, last month I passed the eighth year anniversary of my Garden Journal, here.  Eight is the number of the start of a new order, the beginning of a new era. Eight represents regeneration and resurrection.

I’m telling you about the old days of blogging because I just sort of slipped into a longer than usual break, and realized that I needed to step back from the many online projects I juggle.

It didn’t help that this gardening season wasn’t the best. I was gone from the garden quite a bit, and this year I just plain felt overworked.

Have you ever had that feeling?

Still, it felt good when I did work hard doing work in the RL garden. Helen Weis posted a neat picture “Unplug and GO OUTSIDE” it said. It is restorative to go outside and just enjoy the great outdoors… getting work done at a sane ( as opposed to insane) pace.

I am very sorry to have neglected my friends… and much else, but I needed the time. I hope no one begrudges me that . I don’t think anyone would, really.

What were the accomplished chores?

I weeded like a crazy woman. And then called in the recruits.

I pruned – broken and dead branches, overgrown shrubs, then did some edging and set the mowers in motion (I no longer do the mowing).

Together we trimmed up the badly damaged willow tree. That was quite a bit of work, but it looks passable now. We gathered and burned bonfires of broken branches from everything downed by winter’s ice storm to the two violently wild summer storms we had this year. The trees are a fraction of their former selves, but this is nature’s way.

The garden is groomed…gone from its unkempt slatternly ways to a decently presentable visage. Not perfect, but much,much improved.

I reinstated some things in the blogs, too. Still needs tweaking and then I hope to pursue it throughout the coming year. Was a little consternated with the recipe component of the website -but it seems to work now. Why do so many of these thngs appear to work and then oopsy the gremlins get in there and it suddenly doesn’t? I wanted to photograph some scenes and do a nice blogpost for fall…but went to IKEA instead and we are updating our guestroom area.

Fall isn’t over, so I might yet pull some things together with this blog.