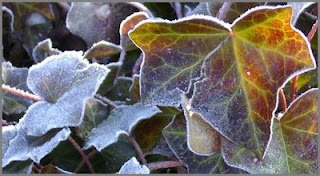 Yes, the annuals are gone, the garden is looking brown, and I left a forgotten houseplant pot outside- now a mushy brown and deflated remnant of itself. I hate when I do that… but I think I do almost on purpose as a reminder that everything is imperfect. Of course, being me, I wouldn’t have to remind myself quite so often; as being me, it is quite obvious. (Note to self*)

Tomorrow is supposed to be a pretty day, and on my way to Curves this morning I noticed the some trees actually turned some bright colors- against the back drop of mostly bare branches of their neighbors. It is as if they were playing their Halloween trick to sneak in a visual treat or two. I wouldn’t be surprised if science doesn’t find out that plant life has a type of brain or something…like electrical currents of communication or some strange thing we don’t yet know about….

Hey! That would begin a whole new set of garden tips 🙂 ( and they laughed at the idea of playing Mozart

We’ve had nightly activity of skunks around here, the smell is unmistakable.

I really miss my old dog- he was a good dog and a deterrent to garden nuisances. I don’t know if I can find one as good- he was just the type I like: harmless, yet protective (in a nice way) with a scary growl for strangers, but immediate acceptance when the masters introduced you; large and independent, but liking friendship and companions, tolerant of cats, (except for the unfortunate kitten that got between him and his meals), fierce enemy of groundhogs, homebody habits, obedient when he knew you meant it. That makes a good dog in my estimation.

If he had one fault it was that you couldn’t trust him with chickens, the hunting part of him just couldn’t resist trying to grab them in that mouth of his…. He was mostly a golden Lab, but had a fiercer demeanor than you usually find in their character, and he was a bit larger than the usual. Other than that his physical appearance and personality were very much indications of his Labrador DNA.

If we have a warm spell now I suppose it will be our Indian Summer. so I better take heed and make the best use of it in the garden. That is the last of the good weather for getting leaves into composting piles for next year, and clearing the vegetable garden of this years debris. If dry enough, it is a good time to till up the kitchen garden for next year. Opening the soil for frost action is a farming practice around here, although a declining one (in favor of no-till herbicide based farming); but tilling up the ground exposes insect eggs to frost, and helps give good tilth to the soil.

Enough of my rambling on and on…
til next time, Gardening Friends 🙂