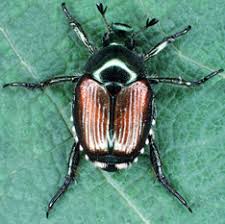 With all the rain, and believe me I am so grateful that I don’t live in the areas prone to flooding, which have been under watch while more rain just keeps coming my ground is soggy. Truth be told, everything is damp and clammy. And the creepy crawlies are emerging.
Earwigs… those horrors of the night… and of every damp cranny and folded clothing.

Japanese beetles have invaded this part of Ohio and have been spotted eating all the roses and floating in the kids pool. Ewwww. When I first moved out here twenty and more years ago there were no Japanese beetles. But I knew they were coming, and with advancing development, accelerated their invasion. When I was little I was the head beetle executioner in my Grandfathers garden. Located in the NE quadrant of Ohio, they had already had a severe Japanese infestation, much like what I am seeing here presently. That was back in the ’60’s. I had a jar of kerosene and hand-picked the buggers off the roses, dropping them to their death in the kerosene. That was how we did it in those days. Crude but effective if you have volunteer labor.

Now I am thinking of applying ‘bacillus thuringiensis’ to the grass to kill the beetle larvae. Yet, out here with so much ground it is almost a lost cause. Maybe I should order some more praying mantis, who eat all sorts of noxious critters. I had brought some egg cases to the property in the early days here and the praying mantis population lasted for a number of years, but I haven’t seen any for a number of years now.

I’ve seen a great drop in bees, and butterflies as well, although they are present, it isn’t in the numbers of years ago. I don’t know what to blame, but likely the pesticides and destruction of habitat. Those are usual suspects.

Well, that is my report on this steamy July so far.

DISCLOSURE: I may be an affiliate for products that I recommend. If you purchase those items through my links I will earn a commission. You will not pay more when buying a product through my link. Thank you, in advance for your support! Privacy Policy
« A New Favorite, shhhh, it’s Illegal
Summertime Blues »