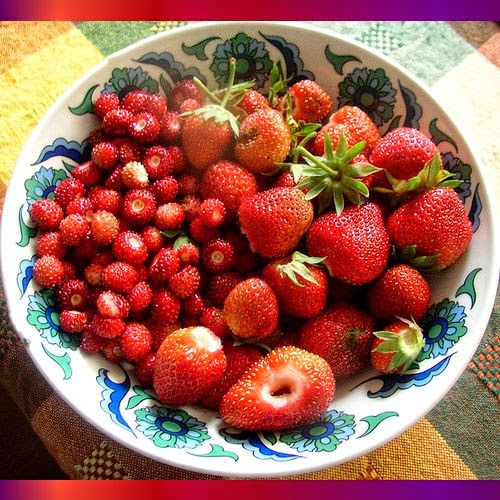 “Long about knee-deep in June,
‘Bout the time strawberries melts
On the vine.”
–   James Witcomb Riley

That is where we are in the year’s rivulet which we mark in our short span of life. Knee deep in June already! Ohio’s strawberry time, where small, but bright red strawberries with their sweet summer aroma are in the field and farm markets. I once had a big patch of Earliglo, and this year, in the memory of that, planted out some strawberry plants under the heirloom tomatoes in my new raised bed. I should try to plant more strawberries I think. If I do not get things planted within this short window of early June, I risk losing to the heat of July.

It has been hot, but very rainy here. The raised bed planting has proved fortuitous for my tomato plants, since our water table is high. Last night was another soaking rain, with its ominous claps of thunder breaking the quiet of the night.

I wonder about this summer. It seems so prematurely hot and I wonder what that bodes for the rest of the season. Checking in with the Almanac, they seem to have gotten it wrong this year. “Summer will be cooler than normal, with the hottest periods in mid- and late July and early to mid-August. Rainfall will be below normal, with the greatest threat of drought in the east.”. Doesn’t sound like my weather.

Started writing that in the middle of June- here it is almost over!
The rest of the poem for midsummer Midwest flavor.

Tell you what I like the best —
‘Long about knee-deep in June,
‘Bout the time strawberries melts
On the vine, — some afternoon
Like to jes’ git out and rest,
And not work at nothin’ else!

Orchard’s where I’d ruther be —
Needn’t fence it in fer me! —
Jes’ the whole sky overhead,
And the whole airth underneath —
Sort o’ so’s a man kin breathe
Like he ort, and kind o’ has
Elbow-room to keerlessly
Sprawl out len’thways on the grass
Where the shadders thick and soft
As the kivvers on the bed
Mother fixes in the loft
Allus, when they’s company!

Jes’ a-sort o’ lazin there –
S’lazy, ‘at you peek and peer
Through the wavin’ leaves above,
Like a feller ‘ats in love
And don’t know it, ner don’t keer!
Ever’thing you hear and see
Got some sort o’ interest –
Maybe find a bluebird’s nest
Tucked up there conveenently
Fer the boy ‘at’s ap’ to be
Up some other apple tree!
Watch the swallers skootin’ past
Bout as peert as you could ast;
Er the Bob-white raise and whiz
Where some other’s whistle is.

Ketch a shadder down below,
And look up to find the crow —
Er a hawk, – away up there,
‘Pearantly froze in the air! —
Hear the old hen squawk, and squat
Over ever’ chick she’s got,
Suddent-like! – and she knows where
That-air hawk is, well as you! —
You jes’ bet yer life she do! —
Eyes a-glitterin’ like glass,
Waitin’ till he makes a pass!

Pee-wees wingin’, to express
My opinion, ‘s second-class,
Yit you’ll hear ’em more er less;
Sapsucks gittin’ down to biz,
Weedin’ out the lonesomeness;
Mr. Bluejay, full o’ sass,
In them baseball clothes o’ his,
Sportin’ round the orchad jes’
Like he owned the premises!
Sun out in the fields kin sizz,
But flat on yer back, I guess,
In the shade’s where glory is!
That’s jes’ what I’d like to do
Stiddy fer a year er two!

Plague! Ef they ain’t somepin’ in
Work ‘at kind o’ goes ag’in’
My convictions! – ‘long about
Here in June especially! —
Under some ole apple tree,
Jes’ a-restin through and through,
I could git along without
Nothin’ else at all to do
Only jes’ a-wishin’ you
Wuz a-gittin’ there like me,
And June wuz eternity!

Lay out there and try to see
Jes’ how lazy you kin be! —
Tumble round and souse yer head
In the clover-bloom, er pull
Yer straw hat acrost yer eyes
And peek through it at the skies,
Thinkin’ of old chums ‘ats dead,
Maybe, smilin’ back at you
In betwixt the beautiful
Clouds o’gold and white and blue! —
Month a man kin railly love —
June, you know, I’m talkin’ of!

March ain’t never nothin’ new! —
April’s altogether too
Brash fer me! and May — I jes’
‘Bominate its promises, —
Little hints o’ sunshine and
Green around the timber-land —
A few blossoms, and a few
Chip-birds, and a sprout er two, —
Drap asleep, and it turns in
Fore daylight and snows ag’in! —
But when June comes – Clear my th’oat
With wild honey! — Rench my hair
In the dew! And hold my coat!
Whoop out loud! And th’ow my hat! —
June wants me, and I’m to spare!
Spread them shadders anywhere,
I’ll get down and waller there,
And obleeged to you at that!