Home » Live and Learn: Things This Garden Taught Me 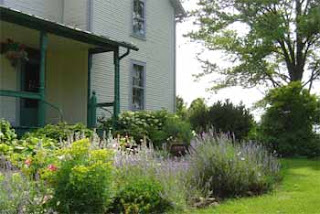 My city garden taught me that I could make a beautiful garden, and it had shown me my reach. This garden had shown me my grasp, and it has also shown me my limits and foolishness. Those were good things to learn from a garden, which also tempers its hard lessons with golden moments of comforting accomplishment.

When I moved here, the beast of nature had been held in with a strong hand of determined farmer, which with time and neglect had grown lax. I arrived with my will and vision, but sadly lacking in the knowledge and tools that such land features require. It was a different soil, and a different landform than I was used to, on a much bigger scale. But my naivete saw no barriers to my dream that sweat and diligence could not overcome.

I wasted quite a bit of energy in that mistake.

Lesson 1: Get A Machine To Do The Job

It is almost laughable now. Four acres of mowing, tall grass and ragweed that could grow tall as a man…sometimes taller… all for one lone hand mower to fell. Each season saw us break at least one crankshaft and almost broke myself with exhaustion. As some of the children reached an age to handle the mower we invariably seemed to have a rock or two that had escaped our scouting, and you guessed it: broke another crankshaft. Which makes the mower more expensive to fix than replace, and we finally figured for what we paid in mowers we ought to pay out in one of a size to do the job right.

Lesson 2: Get The Right Machine

Finally we did get a tractor with mowing deck, but that still left more than an acre of hand mowing.

If you use those bitty hand mowers on 6 foot ragweed and 3 foot thistles and grass you have to angle the mower 45 degrees from the ground and it still might clog and shut down. Using the tractor with the damp grasses here, there were times you had to mow several passes on different days to keep from clogging the mowing deck. I think back on it now and fairly shake my head!

But the years passed and we became more mechanized. Machines are man’s best friend when you need to do the “heavy lifting”.

I, at first, tried to hand dig all the gardens, and that is how all the flower gardens were made, but we finally realized we needed a heavy duty tiller. We’ve gone through several of those (and with Briggs and Stratton engines, too!). I slowly have realized the need to work with machines, but also to work with nature, as much as is possible. 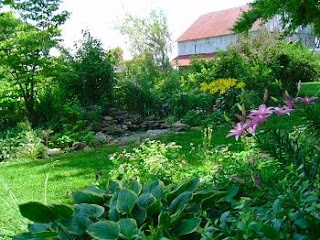 The back acres had been farmed, and the front “garden” (at that time in my mind) area was bare earth from a small house that had been moved from there just prior to our arrival. Bare dirt. I worked up the flower beds, but the rest needed to be put into grass. In the back acres, a neighborly farmer harrowed it for us and we planted it all to red clover to rebuild the soil. The front we hand raked, and planted to blue grass mix.

Raking in the hot summer sun… I. Will. Never. Do. Again.

That was THE hardest work of the most exhausting kind that I have ever done before or since. Picking out all the stones by hand. Grading by hand. Weeks of it.

I must have been a little crazy…but mostly just ignorant I think.

But I finally did put in my flower garden and planted many of my trees. Some of the Norway spruces were planted after doing a turn of duty as our Christmas trees. They are the evergreen trees which thrive best here. I planted them when they were no more than about five feet tall, and they are now all about two stories tall. Now that is something that tells how time has passed by: “So teach us to number our days, that we may apply our hearts unto wisdom.”

I lost many a tree to this prairie land. Some years were droughtish, and I tried to haul buckets of water to keep the little trees alive, but it was not to be so. The Green Ash grove made it, the tamaracks, the hickories, and Chinese chestnuts did not. The Red Oak made it, and so did half the red pines.

Plants that could not survive droughts are no longer here, for the most part. Hybrid roses are mostly gone, except for good old Mr. Lincoln. Now they are all replaced by the hardiest roses known to man: rugosas, mostly. I miss those sweet hybrid tea roses, though… with their huge, perfect blooms in such delicious colors. But that was before the Japanese beetles arrived, so maybe it is okay to do without now.

I know now not to plant things too late in the season, so that they can get their roots down before the summer heats up and the drying winds parch. I flow and bend more with the demands of a xeriscape plan, and water saving methods.

You’d think this lesson was fairly obvious, but the fact is that man is like the grass of the field: we are here a very short time and we are but a passing season within the circle of eternity. Our strength gives way, our plans fade into vapor, our buildings molder into the ground, our gardens are taken over by the wildness of the surrounding natural forces, of plants not of our choosing and insects uninvited.

But we are given our time here to enjoy, to feel the sun on our faces, the breezes refreshing us, the fruits of our labors, our children growing, our flowers blooming, the sweet scents and bright colors, the birds which sing us awake in the mornings, the scurrying little creatures, the impossibly graceful butterfly wings fluttering…. so much, so much. And that is but part of the lessons I’ve learned here.