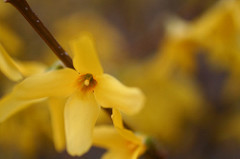 I worked quite hard in the garden this morning, until the rain came down so heavily that it sheeted off my head and soaked my jacket. But it was worth it- finally, I divided some of the forsythia bush off for new shrubs and transplanted a layer tip start of my Viburnum x bodnantense ‘Dawn’. March and April are prime time for making new plants in the garden; from division, mainly. Softwood cuttings are used as well, but those are generally taken a little later.

After getting some divisions from the side I cut the branches to a few feet…blooming tops scattered about my grass. This bush seems to have had some cane borers, so I had to cut out those to healthy wood. With some compost to put into the bottom of the planting hole I got them planted and heeled in well before the rain pummeled me. A cloudy day with rain in the forecast is ideal for planting new plants, it means their roots have a chance to settle in before demands of the sun and wind take a toll (that is also why it is important to cut off a good portion of the top growth). Rain soaked earth is so much more moist than buckets of water, too.

I love the look of such days as today- despite the gray sky there is an intensity of light that seems to illuminate plants from within. The grass is the most vibrant green and the evergreens seem to be pulsating with dark green growth, the yellows of daffodils and forsythia are electric and glowing. the scent of the rain on the air and the coolness overall are a strange type of invigorating. The day just surged with Springtime. 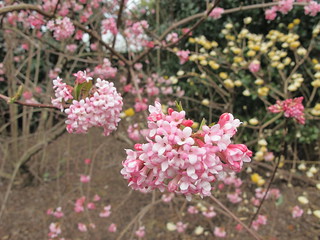 The other transplanting I did consisted of digging up the Viburnum start and a diminutive weigela that was always dwarfed next to the Viburnum. This little shrub was there first, but it had been so overshadowed that if not moved, it likely wouldn’t have made it another year. Besides, I never got to see it, except when I weeded there. The Viburnum was a tip layer- the end of a branch had touched the ground and grew a new plant. I have come to appreciate this shrub so much I was really glad to have another. I planted it in a square bed which had been made with pieces of leftover old railroad ties. There are some mixed daffodils in there, but the white lilac had died. (Probably when the garage was rebuilt.) The viburnums are generally better looking for a better part of the year, anyway. This one has fresh green, curiously corrugated leaves and early pink balls of flowers.

With the weigela I accidentally cut too shallow and took off some of the top growth without root. So disappointing, but I stuck those pieces into a planting area on the off chance that they will root. I have started ‘Princess’ spirea with just bits and pieces of the lower portion that grows roots, so who knows? I gain more plants. Just remember to heel new starts down well, keep them moist til rooted fairly well and perhaps shelter the new root area with a rock. Keeps in moisture and shades the ground… and marks the place if you are distractedly weeding on warm day.