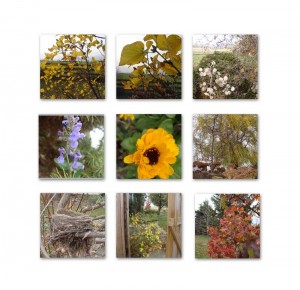 Here are some photos in a plain collage, the only common feature is that they are from my garden and taken after frosts have visited. Now, fun question. Can you guess what the golden leaved shrub is called,(pictured in the top middle and top left photos)? The reason I wonder is [hint] because so often it is censured as “dull” and without much seasonal interest.

Well, now that I have photographic proof, I beg to differ.

That shrub is a Syringa vulgaris, believe it or not. Although many of my lilacs are not as brightly colored in fall as this one – it still proves that they can deliver some fall color, and pruned well, they are something of a feature…besides their incomparable fragrance and fine spring flowers. there. I am now uncloseted, a veritable lilac lover.

Middle left is the diehard survivor, Nepeta mussinii, living close to the ground with its soft lavender bloom. I unmercifully sliced off all its brethren’s heads for winter. Call me Queen of Hearts.

Middle middle is my self seeded calendula. This is what they look like if self seeded, not the full petaled pastel confections of the hybrids. I also have bright orange in the same form, semi-double. They seem to come alive after frosts, but I remember how unpleasant it is to have to pull their carcasses from the frozen ground at the turn of the year. And so, force myself to pull them earlier, while they still are giving last gasps of color to my garden. Isn’t this Pot marigold pretty? I’ve never tried the petals in stews, but my Kitchen garden book says they were commonly used in Medieval English cookery.

The far right middle is the tardy fall color of the weeping willow, Salix babylonica. She sings “Don’t Cry for Me, Argentina” to the wind as she only now loses her leaves while they turn a final gold-yellow.

Now I will have to run the leaf vacuum again since she is singing the finale of the season with the sweet gum nearby. All the other trees have packed up and taken sabbatical for the winter.The photo angle catches the Annabelle and sedum flower heads.

Hidden in the Dawn viburnum, I had no idea this bird’s nest was here…almost at eye level for me. Bursts of sparrows from my pyracantha every time I walk nearby leave no doubts about their whereabouts, however. Bottom left.

Bottom middle, is the spray of yellow leaves from the kerria japonica. I have the single blossom type, which I prefer. It has bright green stems all winter.

I don’t write poetry very often… it takes decades to pry one out of me that I think is half decent in relaying my feeling in something that I also consider art. However I did write one that I posted back in January. Winter’s Meeting.

Joanne is the resident bard… and I thought maybe she would like to read it.