Home » More for me than you, Garden Planning

I haven’t surfed garden blogs in forever, it seems. But today was different and I garnered some great ideas that I hope to put to work for me this year. We’ll see. It all depends on both how diligent I am and how much traveling I need to do. (Since I am the sole gardener, traveling can really put a wrench into my gardening plans).

Growing a blue garden phlox called ‘Moody Blues’. This and the next idea come from Sue’s Garden Journal. 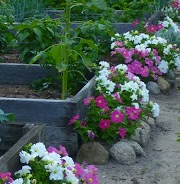 Planting the ends of my vegetable beds with flowers. I already plant flowers along with my vegetables (I can’t help it, it is an obsession). The look of neat little ends is tempting to me. I snipped a picture of how it looks in her garden and a homemade graphic of how I envision mine.

She’s a more ambitious and a neater gardener than I can be at this time of my life. I note from my own experience that the stone edging is pretty, but needs weeding attention. The whole reason I like this idea is that I often have to weed the perimeters of the raised beds. A problem made worse by chickens who like to scratch in the mulch ( an idea which originally was meant to reduce weeding).

Not sure what I would do about those chickens, but the edges facing the lawn (necessary because the septic system is underneath) and house would be laced with flowers. This would not only look pretty, but draw pollinators, and fill in vulnerable spaces with desirable plants. Any area filled with desirables is less space for the UNdesirables. I love the way her garden mixes flowers and vegetables.

My vision is similar, but without the fieldstone. I think I will need something, but not sure what. old fence boards (cut to size) laid flat could work. I’ve used salvaged brick in other parts of the garden.

I like the the thought of the boards, but not totally convinced. The flowers I would most like to see in this picture are the little single Tagetes (Marigolds). They would serve double duty as nematode controls, hopefully.

If I am to gain control of this garden in the new season, weeding and preparation will have to be aggressive in the earliest part of the Spring that I can work the soil.

What I like about this idea is that it cooperates with the situation I already have:

I do admit that two of the raised beds on the side need to be recovered from weeds. One was mostly reprocessed this past fall, but the bed with strawberries is more of a challenge.

You may remember my front walk ‘lavender hedge‘? Well, after reading an ode to the fragrance of lavender plants, an idea was sparked for me.

I have a raised planting area along the back deck approach. Nothing grows there. Not mint, nothing. I think it is too dry for what I attempted to grow. So, this year I will try herbs which like dry feet, lavender to be precise; and maybe a rosemary just to see if it will survive.

Those are my humble ideas for the garden this spring.

New plans for a garden don’t have to be unique or cutting edge trendy. They may simply be a good solution for a particular problem, or inclusion so something that has proven pleasing elsewhere.

I remember reading an English garden writer years ago, it may have been Margery Fish or it may have not. The point was made that some flowers can be perfectly suited for planting even though they were spurned by the garden world cognoscente. Such blooms as lobelia, pelargoniums, alyssum, and petunias. It made a lot of sense to me: why should we be plant snobs?