My husband and I bought and started homesteading this place in the mid 1980’s. I had no skills, and plenty of dreams. I never managed to have that flock of sheep I envisioned, but instead raised a flock of children. That became my main crop.

We all worked hard. I sure wish we had used more mechanized equipment. I truly know what the old saying means, ” a hard row to hoe…”

It was practical to have chickens, and there were two old coops on the property (everything was old, run down, dismantled or in the process of being dismantled when we moved here.) I used to say the place was within a few years of being condemned.

I started my flock of chickens with Rhode Island Reds. Next added some Barred Rocks, and finally added Golden Buffs.

Someone gave me a couple of their extra roosters. When they fought for dominance- one was given away.

The Rhode Island Reds were the hardiest, the Barred Rocks were less productive layers and the Golden Buffs were the best layers. Originally I had wanted hens good for both eggs and meat, but after the short-lived “meat chicken” fiasco, I learned that our family does better with someone else producing our meat.

We had lots of eggs for many years. I made custards and quiches, gave away dozens to all my friends, and managed to sell a little.

After a raccoon raid left all my chickens dead, I stopped raising hens for many years. Saying for the past ten years or so “Maybe this year, we will get some chicks…”

This year, we finally started with a small flock of six Golden Buff pullets, and added a pair of Bantams.

We introduced the chicks to to the bantams, and they are now all staying in a tiny coop together, in relative harmony. Except for one chick that they all picked on; she is back in the box inside the house to recover, a sort of chickie hospital.

I have the biggest truck garden this year since those early years when I had something like a 25 x 100 yard garden. In those years we grew corn, beans, greens, head and Cos lettuces, carrots, tomatoes and peppers, raspberries, strawberries, melons, eggplant and zucchini, and numerous other things. I had a separate herb garden.

This year it is tomatoes, peppers, cucumbers, strawberries, cutting flowers, parsley, cilantro, dill, mints, radishes, mixed lettuces, a bit of Chard. I have one conventional garden planted out in rows or blocks and one with raised beds.

I just finished creating the walkways with an experimental weed suppression system of cardboard, covered with wool rug (it got damaged beyond saving) strips, and covered entirely with cypress mulch. As with all new paths it looks wonderful, but time will tell if it reduces the work of keeping that outlying garden.

My friend has started her conventional plot in one section of my old veggie garden. It looks great, and her radishes and beans have sprouted. It is about as big as the one I have closer to my house.

I used to grow abundant flower gardens in the English Cottage style. Through the years, my workload with homeschooling and raising kids increased, I entered that limbo where you take care of aging parents and raise your kids at the same time, and kept a very busy Church schedule. Something had to give, and the flower gardens started waning, the food gardens became mostly a few pepper and tomato plants. The native grasses came to claim the abandoned flower and food gardens.

I have always tried to keep a couple borders going, but they tend to get more weedy than I can control. I still try.

Most of my hunger for color is satisfied with numerous container plantings and  now a couple rows of cutting flowers in the food garden.

Some years the containers are painstakingly planned, but lately all is much more serendipitous. I rarely start my own flowers anymore. The garden centers have greatly reduced their variety of offerings, and they continue to put little plants in large pots and price accordingly. I put together the best of what I find.

Still, the spring season is an exhausting crush of tasks, and I am so much slower and less capable. I finally learned that what I picture in my mind must undergo a pruning session when it comes to the actual physical effort my body is capable of making.

I try to control my impulse to apologize for what is left undone.

Invariably I start musing about the amount of changes… in my life, in the area I live, in society at large. 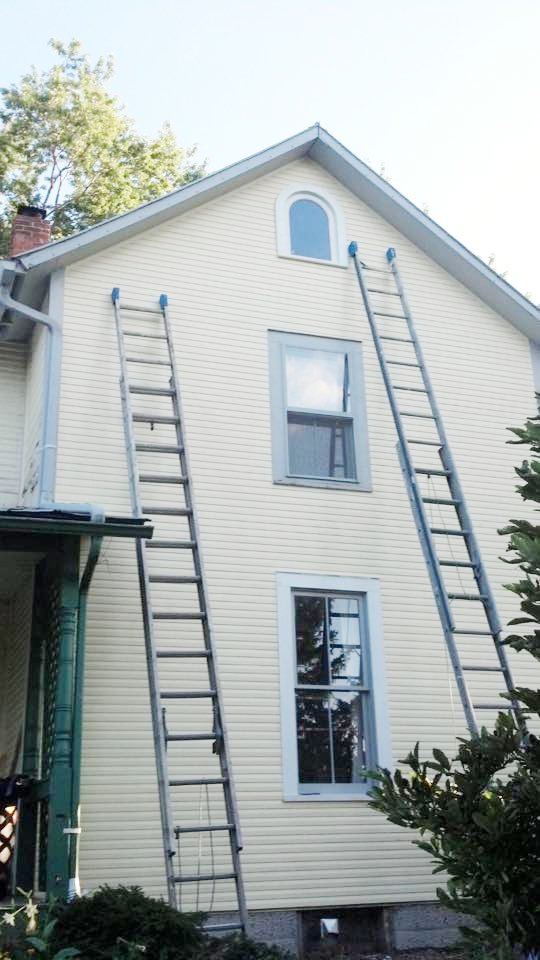 Fewer homesteaders who have ambitious gardens, more urban chickens and tiny “farm” plots, creeping development and increasing traffic, fewer animal herds. Many of the old farmhouses are gone, and new homes sprouting up, most of them inferior in architecture- but of course, not all.

My trees now tower over me, and I have lost a number. The ash are all gone, now.

I start my work in the mornings, and go as long as I can (a pitiably short time), but am more thankful for what is accomplished.

I am presently sitting on a beautiful deck (which my husband built) in an anti-gravity chair. My life did not turn out as I imagined, but it is good now. Satisfying.

Ambitions quiet, small enjoyments shine, and I see how important allowing the moment to have its due attention is, in the movement of time.

I am returning to some of the roots of previous times, but with a different attitude, and my goals are stripped of competition and restless achievements.

There is a great deal of value in growing content, doings ones tasks, and enjoying the pleasures given in an honest and quiet life.

During my homeschooling years I discovered Laura Ingalls Wilder. Came to love her books and read everything I could get my hands on by her and about her. Somehow missed her books during my childhood years.

One thing that struck me was that she carefully edited her histories to show the sunny side of life. At times, real life was so trying that this was difficult. When you read of her early married years, you understand how challenging it must have been to give an optimistic view of a long string of tragic circumstances. Even her own early years were laced with what an adult reader understands is a lot of heartbreak.

There is much that is not written of the hardships of life, of how much a toll is taken by unforeseen obstacles and trials.

When we write of our gardens and farms, there is much that is a tradeoff… shall I do the work or write about doing the work? All my life there has been an ebb and flow, time and attention to one area of effort and neglect of another, then taking turns so that all may have something of a balance.

I see why some value a narrowed focus, but I continue to make my rounds (ever more slowly) to try and keep all the tops spinning! We have our choices of how we live our lives and I no longer see a hierarchy of value as much as a diversity of choices in these things.

I imagine that is partly an outcome of the changes in our society. My father might have seen that there are “right ways” of doing things, even though I think it handicapped him… I see there are more ways to deliver the same outcome. Not to extrapolate it too far, but it does help to be more accepting of oneself and of life in general.

Enough personal history and philosophy, I have a few chores to do….