Home » Not The Emily Dickinson You Knew (but she DID garden) 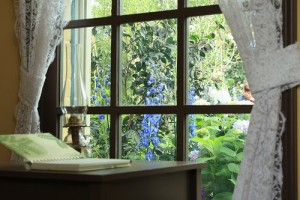 As I said, I took some time to read and one of the books I read was a biography of Emily Dickinson.

“Lives Like Loaded Guns” gave a whole new look at her life and influences and came up with surprising turns; I no longer think of her in the same way. It seems that much of what is accepted was the product of image making from both herself and those who worked on publishing her work. Marketing, it turns out, is an old profession. We might have guessed it, but it still flies in the face of how we like to look at “simpler times”.

One thing fairly true to reality is the fact that Emily Dickinson liked to garden and found inspiration in it. The “Lives Like Loaded Gun” book is not the place to explore that fact, however. It is far more concerned with her brother’s adulterous affair.

would be the book for exploring that question. We might come away with our own questions of how much does our climate and lifestyle create our garden and how much is of our own making and design?

Today we are very widely informed, and though that has its intellectual beauty, our gardening is the worse for it I think. Why would I say that? Gardening is a hands-on occupation. The garden world of my mind was quickly dashed by the elements when I moved here to a windy plain. The bitty-ness of my collector sense was swallowed by open spaces, and English inspired garden plans were foiled on every hand by Midwestern sun, droughts, and cold that belied the climate zone suggestions of many book resources. Old fashioned garden sense is much more informed by the environment and cultural practice of earlier gardeners than it is by garden writers. That is way I see the poet’s ability to entwine plant life into her writing, she knew the plants intimately. It should be in a gardeners code somewhere:
“Know Thy Plants”
followed by:
“Respect Thy Climate”

Those two rules will get the new gardener, and the experienced one along quite well in the making of their garden.

For those interested in some of the garden flowers that Emily Dickinson gardened with and wrote about… I have written a post just for you! Victorian Flowers: The flowers of Emily Dickinson. Exploring the stuff of the language of flowers and a mix of the interesting and unusual and the ordinary plants in those old fashioned gardens.

It is intended to accompany the article on Victorian gardens. Enjoy!

might take awhile to load- but the following is interesting:
PBS has a video witha transcript included, and it comes in mp3 format also.
Garden Roots of Emily Dickinson’s Poetry

Re-creation of Emily Dickinsian garden at the NY Botanical Garden.