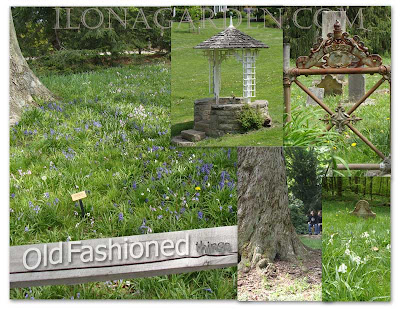 Three Revolutionary soldiers are buried in this pioneer burial place, the Beard-Green cemetery, located within Dawes arboretum. On one old grave, whose markings were long defaced by rain and other unkindnesses, grew a lone stand of scilla hispanica. I sat on the ground to photograph it; as in olden custom there were plots that were fenced with ornate iron barriers to forgetful feet. The graves for infants and children were reminders that mortality was often early for many. And surprisingly elderly ones made me wish I could ask the secret of their longevity.

The parking lot held a pretty “mead” of tiny spring flowers at the foot of an old tree, fenced off with post and rail. And I can never resist old wells… this being a particularly pretty one located next to the old spring house, which I didn’t photograph. Old fashioned living, both simpler and harder…than our own.
Their complexities were in social customs, in skill sets that they considered common, while we are mystified. Leisure activities of the rich included making a rustic cabin in the woodsy part of their property- not too far from the house, but enough to pretend that their usual world was far away. It, too, had a log cabin type of spring house. Fresh berries refrigerated in a stream fed house… keeping cold milk and maybe thick cream for biscuits baked in an old fireplace oven, surrounded by wildflowers and the calls of woodland birds.

Idyllic… if for only a while.

Be sure to see Gardens in Ohio.

DISCLOSURE: I may be an affiliate for products that I recommend. If you purchase those items through my links I will earn a commission. You will not pay more when buying a product through my link. Thank you, in advance for your support! Privacy Policy
« Dawes: Wildflowers in May
Garden Therapy »