I grow the herbaceous type of peony, both the types with single and double blooms. I love their fragrance and the delicate satin texture of their petals. They have good looking foliage on round bush-like plants, and for lots of people they say “Spring has truly arrived”. Their blooms are so full and opulent, alone in a vase they are magnificent, mixed with other flowers they hold center stage. They are definitely one of the divas of the garden.

Peonies are a mainstay in the flower border, but used other ways in landscapes, too. We usually think of peonies during their bloom season, which is late May and early June, but the late summer/early autumn is the proper time to plant them and ( if you absolutely have to) divide the and move them.

I’m posting about this now since it is important to prepare the soil well for your peony bed– which might stay in the same place and bloom for longer than you! Dig down a depth of about a foot and a half, mix in plenty of leaf mold or compost, along with a trowel of bone meal or superphosphate for each plant. Add some to the general area around each plant, too… for the eventual roots reaching into their full grown span. Peonies like to eat, so feed them well. A bit of wood ash in the vicinity doesn’t hurt either- they don’t like things too far into pH acid balance. A few peony pointers: plant with “eyes” pointing up, and don’t cover too deeply- two inches should about do it- protect during their first year, but don’t smother them. Keep new plantings moist- like with all freshly transplanted stuff.

Peonies like and need sun, aren’t fond of competition for food and moisture, so are not good in places where tree roots encroach. They are important plants in the perennial borders during the early summer, and are friends with German irises and roses, which have similar growing needs and were found in Grandmother’s garden borders. In fact, pioneers often took their peony roots west with them. A touch of home.

Mary Dodge Woodward of North Dakota, wrote lovingly in her diary in 1888, “My red, old-fashioned peonies have stuck their pink noses out of the ground. I covered them up last night. I have watched them ever since I was a little girl: in Vermont, in Wisconsin, and now in Dakota Territory where they still thrive. Anything that can live in this cold country should be reverenced. The rose-colored one and the white one are not up yet. I shall see them later” -from some fascinating history of Midwestern women. 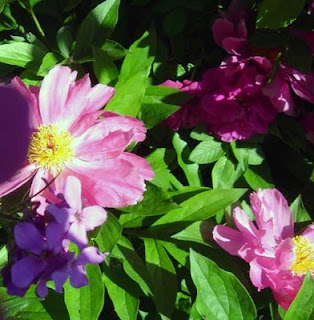 My own peonies are “Fairies Petticoat”, White Wings”, the old “Festiva Maxima”, one given me that might be “Kansas” or something similar, “Pillow Talk”, and the unnamed one pictured here.
They are hardy from USDA Zones 2 through 7 or 8.
Technorati Tags: peonies,