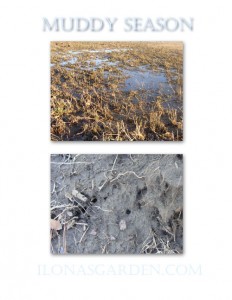 Cold Climate Gardening’s Kathy Purdy calls it The Mud Season, and it has hit Ohio with a vengeance this year. Right now in our area it is more like Pond Season which will morph into Mud Season.

For mommies, that means trying to stave off the inevitable tracks through the house. Mats at the door, double mats in fact (one inside, one outside the entrances). If your family can get used to it, the rule of “shoes off at the door” helps.

For gardeners, especially if they garden on clay soil, the admonition is: don’t touch that soil. OK, you can touch it, but don’t try to dig in it yet. Besides the fact that it is hard to work, clay soils worked too early and while still wet will clump when they dry. Those rock hard clumps can be impossible to return to good tilth in time to plant. They will interfere with plants, compaction of the soil interfering with root growth and losing the important air spaces. Yes, plants must breathe both above ground and underground. Good humus-y organic soils do that, but compacted clay is difficult to garden on.

Wait until the soil dries out to a crumbly texture (when it crumbles in your hand, instead of holding a clay ball when squeezed), keep on adding amendments like compost, and work up for planting.

It is a spring like this when raised beds prove their worth. Raised beds dry out more quickly in the spring and allow for earlier sowing.

Before the winds kicked up too much I made the rounds of my garden, hauling a few large branches to the pile that is accumulating in the back part of the yard. There was little blooming… a stand of snowdrops, and a lone crocus struggling in the grass. All the rest of the crocus are merely green shoots- not at all like most ides of March.

While there were signs of our spring, it will take the warmer temperatures predicted for later this week to convince the bulbs, trees, and shrubs to display their hand… they hold it close still, betting that winter will strike again. And if I were a gambler I would bet with them, so I will not complain about the late arrival of blooms here. I hope it means that we will have a good display later, without the spoiling late frosts. 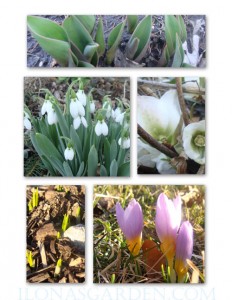 The hellebores were rather smashed underneath the snows this year… they are blooming, but none are held high as they usually are. I put the camera close within the foliage to snap a picture of a few of the blooms.

I had some book from the library, but was very disappointed that my eyes were not up for reading. They are better now, a little, and I hope to spend some time with this book:

I was very happy to find it since starting a prairie patch in the front yard last year. I think prairies are part of the “slow gardening” that promises to be a more restful and satisfying approach to gardening. It was once the native environment here… not that it could be replicated, but it has the right “feel” for this place.
~~~~~~~~~~~~~~~~~~ // ~~~~~~~~~~~~~~~~~~
© 2010 written for Ilona’s Garden Journal. Copyrights apply.