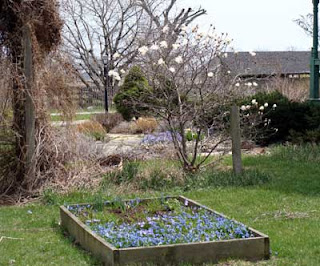 “Every clod feels a stir of might,
An instinct within it which reaches and towers.”
-James Russell Lowell

Out and about in the garden, and things, though late, and a little worse for wear with the late frosty weather, are popping. The winter honeysuckle finally put out some bloom, and the quince is flowering now, though deep in the bush or on low lying branches -which is usual after the kind of cold snaps we have had this winter.

It was quite warm today, and I put in a little weeding time. Took the camera around while inspecting what is up with the garden. the red bud trees have the tiniest little pink slippers of bud, and the lilacs held compact pyramids of greenish bud… the Virginia bluebells have their lush green leaves and just opening to their watercolor tints of blue, purple, and mauve.

Handyman worked on the tractor, but they gave him the wrong part, so we have to wait for Monday to get it going. It’s time for the first mowing- things look pretty ragged around here ( but there were so many pretty anemones in the grass out front that I am not going to mow there for awhile.) The Magnolia stellata did not have the flurry of white that it did last year, this years more usual late frosts finished off much of the bloom, but the ‘Jane’ magnolia looks good. It is just now blooming… although I hear we are in for a big temperature drop.

I noticed that in the village the Magnolia Soulangea is still blooming, and the Bradford pears are in full bloom, some of the crabapples were,too, although mine are still tight buds, keeping close from the many bees that are visiting the garden this year. My daughter got her first bee sting of the year. We used to have that all the time, but the bee population has been down and that had become a rarity. I was sad for her, but glad that we have more bees! The first thing she said is: “Are the honey bees still in danger?” I said yes, why? and she looked so sad when she said ” I stepped on one and killed it.” Didn’t know whether the sadness was environmental awareness, the pain of the sting, or both! I got out the baking soda, although she said she didn’t need it, but she applied some. Still, the foot is swollen and itches now. It seemed I always got stung a number of times in a summer…used to make me so careful when walking through the yard.

The farmer next door (a new one who farms differently) has put the field to alfalfa this year. I haven’t seen very many wheat fields in the vicinity this time around. Noticed two Holstein calves down the road. The biggest crop is the housing developments (isn’t there a housing bubble, still? Shouldn’t that have put the damper on the proliferation of all these houses?) and I wish they’d slow that down. It is a crying shame to see what is arguably the best farmland in the US put out of commission under all this building.

OK, enough grousing… I should have told you about all the birdlife I’ve noticed here. The robins and mourning doves have been here awhile. The mockingbird showed up: late but raucous as ever. The blue jays seem to have moved on… and the grackles are here in full force. The warblers have moved on north I think- I don’t hear their songs anymore.