Earlier in the season my son-in-law asked me about planting a new arborvitae. He lives in Georgia, and I had seen his homesite for a screen he wanted in his back yard during last year’s visit.

Arborvitae was a fine choice for what he wanted and where the plant would be situated. Some people plant them near their house as a foundation plant, but these are true trees and get large. As a hedge or screen area, they take shearing well and grow quickly.

While answering his questions on basic transplanting of a tree, I included something controversial among gardeners, landscapers, and researchers. I gave advice to use Starter fertilizer.

Experts now give opinions ranging from saying that fertilizer will damage the roots to saying it is nothing more than a placebo for the gardener. That hasn’t been my own experience, though. 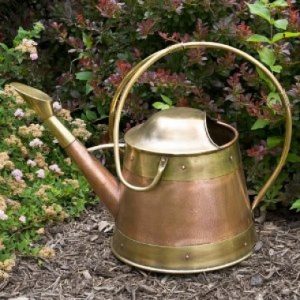 Not to say that I am smarter than researchers, but I am not sure of all the factors that led to the conclusion that transplant fertilizer

is an unnecessary part of the process. And the same thing applies to the now accepted view that it is better to not amend the soil for a new shrub or tree.

My inkling is that it all roots back into the American way of thinking that if a little of something is good, a lot of it is ten times better. Joe Gardener has been known to over fertilize and kill things, so no fertilizer is better until the plant gets established. Now that is just surmising on my part.

What I know is that when I first gardened and added transplant solution to a new tree it thrived much better than when I followed the changed method.

Perhaps because I am often sparing in such things… my results from adding in peat moss and some compost were better, and I say that after more than twenty years of observing these trees. They were once no taller than my twelve year old child, and now rival the height of my two story house. They thrived! But the ones that I took more care of at the start, they thrived better.

Old timers advised using things like compost tea, or manure tea. I had particularly good results when I used a seaweed additive

You don’t need to use a starter fertilizer, but if you do the rule is to use it watered down and sparing. My opinion on peat moss is known… I ♥ Peat Moss

Vegetable gardening is underway for the season.

An old phenologically based garden tip for Ohio is to plant corn when the oak leaves are the size of a mouse ear. The time has come to plant those corn seeds in Central Ohio.

Two years ago I was painfully reminded of the importance of crop rotation. I had planted a mesclun mix of greens which included kale. Those kale plants persisted in my vegetable patch.

I didn’t think much of this until two years ago when I ramped up the food gardening again and my broccoli plants became stunted and weak. Clubroot. Easily prevented by liming the soil and rotating the crops. Which I did last year, and produced a sumptuous crop of broccoli … my children still remember and ask for the chicken broccoli casserole.

It is a good time to go around and give everything its first dose of fertilizer. I’m ready to do that now. Especially the roses, as they are putting on new growth right now.

Everyone hated the snow, but my garden has had less damage than most years- the blooms are breathtaking this year.(Except for overweighted and broken evergreen shrubs… but that was winter’s story). I am going to prune them a bit.

Oh! That reminds me. The shoots on the mugo pines, called candles, are now ready to prune. Another task to put on my list for today- which is not at all burdensome since the sun is shining and I feel like I need to be in the calming presence of my garden.

Get a good pair of pruners if you don’t have some already.

‘Til Next time, Friends!