Home » State of the Garden September 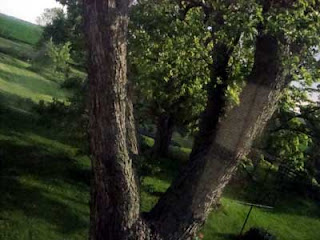 Didn’t I just give you all an update? Well, I walked you through, but there are other elements to what is happening here. Like trimming and pruning old big trees. I didn’t tell you about that, did I?
Coming to this garden most of the great old trees were gone. This area is known for its savannahs of Burr oak and Hickory. What did the people who owned this place previously plant and retain? Can you guess? Silver maples. Read and weep. I don’t hate them, but they are low on my list of what I desire to have in an ideal landscape.

However we work with the hand we are dealt. I have a number of old silver maples on the lot and my husband (…now that he occasionally has been mowing with the tractor- it is quite amazing what you notice perched way up on the tractor seat) noticed a large division forming in a forked trunk. For years he has been concerned about the old maple that is planted much to close to the house, but which I appreciate for its cooling effect. After the past years storms, which damaged homes and trees in our area, we decided it was time for a professional opinion.

Good at researching and asking around, my husband found an arborist, who I was pleasantly impressed with. He suggested trimming out lightly and using a wire brace for the tree mainly in question, and simply getting rid of dead wood and lightly pruning back some of the overhanging branches of the big old tree close to the house.

I think we will be getting the work done this fall.

We talked over my neighbors butcher job of her large maple ( he had been consulted on that, but I guess his advice wasn’t aggressive enough). Heading back a large tree to mere stumps of its branches seems just a sin. It was in need of help, but that severe of a pruning all at once seems like a death knoll.

The unseasonably cool weather has been wonderful for working in the garden. I am feeling like I am making progress in cleaning it up- it had gotten pretty weedy and everything was splayed out in a most unattractive way. Judicious pruning is helping immensely.

My vegetable garden was a bust for the summer. The tomatoes are in terrible shape. Rescued a few, and found some nice peppers which I brought into the house last night. I need to weed out those gardens better- haven’t kept on top of it as I should have. The tomatoes over in the garden that I was going to change into a cutting garden, but didn’t because I had some extra tomato plants is growing the healthiest looking tomato plants, but I need to check and see if there are any actual fruits under all those leaves. Didn’t stake those up, but they are doing so much better than the ones I did. They are in a part sun/part shade which delays fruiting (and which is why I was changing back to the former veggie garden space in the full sun “field” part of the yard.)

Ok that is it for now… I am envious of Bren‘s produce poundage which keeps climbing every time she posts it on twitter. She is cooking up a storm and takes pictures that belong in a food magazine.