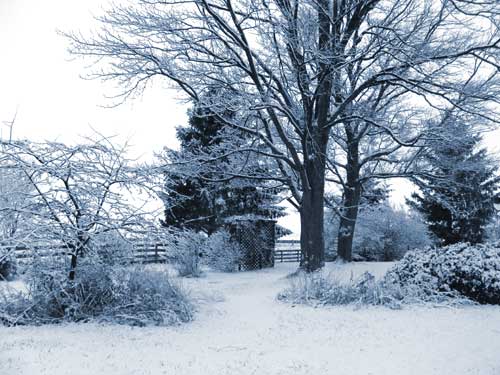 Now this is more like it…now it is winter in Ohio, albeit a little off schedule. I thought I would take the opportunity to mention a few things about planting zones, amid the news this year that the zones will supposedly change. One of the more helpful articles on this is from Farm and Garden – quoted a bit first, below.

My own experience is that while we may play around and stretch the boundaries a bit in our garden planting, the fact remains that if you live in a cold climate, especially, you will get one of those really cold winter snaps every few years or so. If you have planted something that isn’t hardy in your area ( as categorized by the zone maps) you will probably lose it to the extreme cold of that year. This is especially true of some trees like the ornamental cherries and your rose bushes. One particularly cold year I lost all my roses, not a few plants. From that time forward I planted only the hardiest, except in very sheltered areas of my garden ( right next to the leeward side of the house). That year I also lost my Chinese Chestnut trees. The zone maps warn you of this sort of risk. Of course you don’t have to heed it….

The zone maps tell you more about plants than they do about your expected weather- as the Farm and Garden article points out. It is really an issue quite apart from global warming, though that is the way the political hotspot reports like to warm things up. Regardless of what you think on the issues, the plants will only take so much cold when they are considered hardy to a specific zone. And that is the information you want.

There are many other factors that affect cold hardiness, too. Some things are hardy if they don’t have wet feet, or if they are properly mulched, etc. So the combined knowledge in a plant profile – where it was native, the zone it grows in, the moisture needs, etc… these will all factor in. And a strong healthy plant weathers through a challenging season better than a stressed plant.

Things like this were in my head while I have wondered about how my garden will take the broken dormancy of January and the arctic cold ( that is what the weatherman calls it) of this February. We have little to no snow cover. I am bracing for the worst, but then my garden is under reconstruction anyway, and I have no idea what has survived the neglect of the past several years. I do know that some of my trees are in dire need of pruning. I looked out at the weeping crab, Jade, and it had water sprouts galore! How did those get there? Probably overlooked since I have a Hansa rose shrub underneath…. but the winter has exposed the needed grubbing out that must come as soon as the weather breaks.

So when do we need to use zones? If you farm in warmer climates you need to know how much cold a plant must have. …If you’re growing perennials in a cold climate you need to know what zone those plants are hardy in, and in which zone you’re located. …The USDA zone map doesn’t guarantee a definite average minimum temperature. Microclimates are small areas inside a zone that are a little warmer or cooler than the surrounding area.~Farm and Garden

the U.S. Department of Agriculture has been working on updating its climate map for nearly four years, but hasn’t produced a finished product. –Carpetbagger Report

“the U.S. Department of Agriculture is now in the process of redrawing the USDA Plant Hardiness Zone Map, a tool used by gardeners to determine what trees, flowers and food crops will survive in what zone. The map, first created in 1960 by Henry T. Skinner (then director of the U.S. National Arboretum in Washington) codes the country into 11 regions, determined by the duration of cold weather and lowest winter temperatures in each zone.

The map has been adjusted twice before: once in 1965, to add temperature data that had been missing from the original; and again in 1990, to include climate information for Canada and Mexico and to reflect what the USDA Web site officially describes as “changes in the weather.”

The USDA’s most recent plans for revision were initially undertaken by the American Horticultural Society with a grant from the USDA. The AHS published its findings in its own in-house magazine, The American Gardener, in 2003. Across much of the country, it showed climate zones bleeding to the north–reflecting a general warming trend and a changing habitat for plants.

The USDA, however, called the map inadequate and insisted that the AHS withdraw it.” –Columbia News Service

=====
Unrelated, I saw the most beautiful full moon yesterday. It was orangey yellow and then turned a soft gold as it rose. In my Winter page I have lists of the names for the winter moons. In days past when the lunar months ruled man’s recognition of passing time they were given descriptive names. February Moons include Big Winter Moon, Horning Moon, Hunger Moon, Ice Moon, Red Cleansing Moon, Storm Moon, Sun Moon, Quickening Moon, Wild Moon, Chaste Moon, Dark Red Calves, and Trapper’s Moon. Ice Moon is the Celtic appellation and I think that is the one that best fits our season this year- I was looking at the “Ice Moon”. Once high in the sky it was the appropriately cool white and gleaming orb that lights the winter’s sky with a burnished silver glow.
====

And on the note of moons… this year we will get to have a blue moon- so if you ever promised yourself something or hoped for something in a blue moon- this is your time:)
“Although the full moon occurring Thursday, May 31, 2007, will look like an ordinary full moon, it will actually be a bit extraordinary—a blue moon.
What is a Blue Moon?