“It was a dark and stormy night”… is how my uncle jokingly started the telling of some family history as we sat in the living room, all fully aware of the storm predictions and awaiting the next sidewalk report from my husband’s periodical trek to get the next load of wood for our stove. The storm had moved in, and we were ready for it.

The weekend previous I had been to the grocery preparing for the expected visit from my Uncle Bill and Aunt Mary Jeanne, so we were stocked with food. Hurricane Ike, the notorious Ohio Hurricane, had insured that my husband bought a generator rather than depend on the generosity of a friend for the unexpected but occasional power outages that something like an ice storm could easily impose. We felt ready. Bottled water,check; plenty of wood for heat, check; good food,good company, check.

A jigsaw puzzle left unopened from Christmas was hauled out, and Mary Jeanne and one of the kids happily busied themselves with that. Uncle Bill, ensconced in one of the old chairs carried on some conversation…. while I had taken some time out after dinner for checking in on the online world. My husband had been dutifully pacing through the various matters that an ice storm of epic proportions might merit. We settled in, all having seen winter and its worst in other times and places. Or so we believed.

The inkling that this might not be a winter storm as usual began to arise when occasional sound of pummeling and swooshes of ice would hit the roof and slide off overhead. A bit unnerving, but not entirely out of the ordinary for large amount of accumulated ice, but then were the scattered birdshot of ice bits flung against the window. We observed momentarily and went back to our mutual activities. Until the ominous browning of lights threatening to go out entirely. Once, twice, thrice… and then -darkness!

We spoke as if ready, but the scramble was on for flashlights, candles, bearings in the suddenly very dark world that was the house. It is odd how the familiar is so much less so in the dark.

I found later that I had dripped more than a little wax as I went about lighting and situating candles in various parts of our downstairs. The Advent log was thankfully not put away with the rest of the Christmas decorations and provided an amazing amount of candlepower in the dining room. Having used good, solid Scandinavian candles for Advent was now an added boon.

Now all a bit giddy from our rise to the “Adventure” as Mary Jeanne began to call it, we settled in for the unknown time to be without electricity in a very electrically dependent world. Though not for long, as the generator was fired up and whatever steps were necessary were made to transfer our circuits from power company to generator were implemented.

Up to now you have heard of the fairly normal and expected reports of a Midwestern winter storm;  perhaps more than the normal, but still, not out of the ordinary. No, the “out of the ordinary” awaits the telling….

What you might want to know is that in this area of Ohio, after the unheard of appearance of a hurricane in Ohio, Hurricane Ike, many homeowners had cut down their trees within falling proximity of their houses. We have some very large old maples quite near the house, and often disgustedly remarked on the wisdom of whichever previous owners made that decision. On the other hand, those are the very few of the old trees left here, and they do shade the un-airconditioned house nicely in the summer. Our compromise this summer was to hire professional tree guys to trim the trees and create more stability in the branching patterns, etc. My husband was not entirely mollified, but those tress hadn’t fallen in some very demanding weather circumstances and I felt confident they would weather this one.
They did, but as you might guess- not entirely.

As bedtime approached the falling ice had become a bit louder and bit more frequent. Leaving a few candles glowing we went to our respective beds, thinking to get some sleep and wait for good news that the electric company had fixed the lines.

Sleep was not to be. As the night progressed the rattling turned into crashes, Branches must be falling- what if the trees did not hold? I fully expected to see a congregation of souls coming into the living room to huddle together, but no- we all stayed in bed, while the crashes on the roof increased in number and intensity. How much ice can one tree hold? Was the tree dismantling branch by branch? was the next one, the big one? I think I know how people in California might begin to feel about earthquakes!

The thought of my uncles car sitting naked in the driveway, unsheltered from the great branches of the second largest maple; oh well, it is too late now. The cars had been encased in a shield of ice and there was no going outside in this!

There were some times of continuous crash and slide of the ice from the trees, which made for a rather sleepless night for all. There was nothing to do but wait out a long and noisy night, waiting to creep out in the morning to assess the damages. And hoping to survive the night without anything crashing through the roof, which now felt like a very tenuous barrier between us and the outside world. It is a wonder what the loud sounds of something landing on your roof can do to the imaginative psyche.

In the meantime our internet connection had disappeared (who knows the cause of that rather regular occurrence!) and at morning with generator powered coffee maker brewing, we found we had lived through a quite adventuresome experience, one that is referred to for years afterward:”Remember the Ground Hog’s Day Ice Storm of 2011?”

Yes, I remember it well.

For the rest of you – here are the pictures of the aftermath: 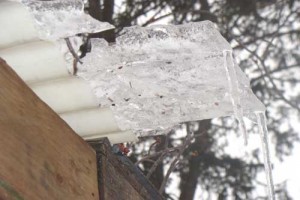 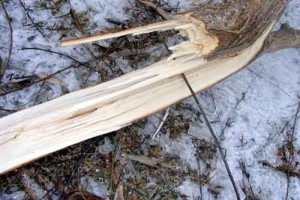 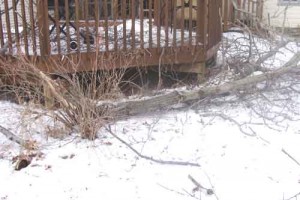