Home » The “what did you do over summer” essay

Remember the first days of school when you were a kid? There were always the obligatory “What I Did This Summer” essays that were supposed to sum up our activities- as a way to segue back into the halls of Academia. Leaving the fresh air and sunshine behind, we gazed through school windows and tried to concentrate on the “reading and writing” of class. This is something like that old essay assignment, cataloging the past months garden efforts and summer idylls.

Full of determination I started off the season strong with planting and getting the garden beds completed. I planted the cool season crops and then the warm season tomatoes, peppers, basil and some gourds, primarily, for the later season. Oh…. those gourds have a story. The ONLY story now in the older vegetable space, as they swamped and swallowed up the plantings and then the pathways…. so now they better produce plenty of birdhouse gourds for my planned fall crafts.

My tomatoes did well in the raised beds in the new/old vegetable patch (remember? I resurrected the original food garden area of my first efforts here on this rural place). Though the heat did take a toll around the last part of July.

I have had some eating enjoyment from those plants, but they came in full production during my out of town trips, which were numerous this summer. So I fed the critters hereabouts a bit more than I fed myself. And some simply “went by” quickly in the horrid heat waves. They are still producing, though, and I can have all the tomatoes I want until frost.

I plucked, and saved in the refrigerator, the peppers and basil that were covered by the gourd tsunami. All I can say is that my food gardening skills are getting some exercise. My planning can use a bit of refining for next year.

The larkspurs returned from last years planting and were a large patch of deep blue at the end of the food garden.

I have been changing around the flower gardens near the house, refining the side garden as it is replacing the front garden which was mown down. That section will be a shrub garden, having a background of Viburnum burkwoodi, Hydrangea paniculata, Contorted hazel, lilac, and peonies, already. I can’t think of any landscape activity sadder than mowing down a beloved garden space, however.

Recently, I have moved and increased some of my perennials. Shasta daisies went to a bed that holds the Beauty Bush. I think I will add in some other “meadow” plants to disguise the abrupt sight of plants in the lawn (they have a plan to “take over” in future yard domination of that part of the yard….shhhh!)

I’ve been very hodgepodge about taking photos- with most of them of my kids on trips to graduation and family reunions. I will slip some new photos in here…. but who knows what seasons and times they are from! 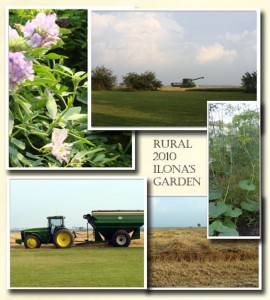 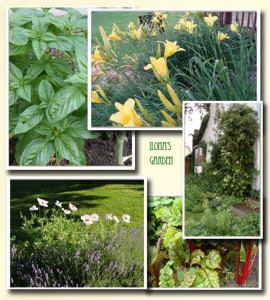