Home » Winterizing The Garden, Putting Pots And Containers To Bed

Kathy Purdy had an excellent article on how she is winterizing her potted plants in her New York yard and I thought I would add my experience here in the cold climate of Ohio to the mash.

First on my list is simply getting the terra cotta  pots into my unheated garage. I leave the plantings in them usually, to give me time to transfer wanted plants to new indoor lodgings. There are many years that the outcome of such plants have mixed results. But always a better chance of carrying through to the Spring then if left on their own out in the garage.

Potting Up My Favorites

My favorites to carry over are especially pretty Geraniums (actually Pelargoniums, but most of don’t call them by their proper names). This year I managed to prepare some with variegated leaves, and place them in my large east facing window. That should give them the best chance for success.

I was a little late, and they were exposed to some mid October frosts that came on suddenly, but looked salvageable. I followed my usual procedure:

I have successfully potted wax begonias, coleus, impatiens, in a similar manner, or by rooting cuttings.

Storing Pots Out Of The Weather 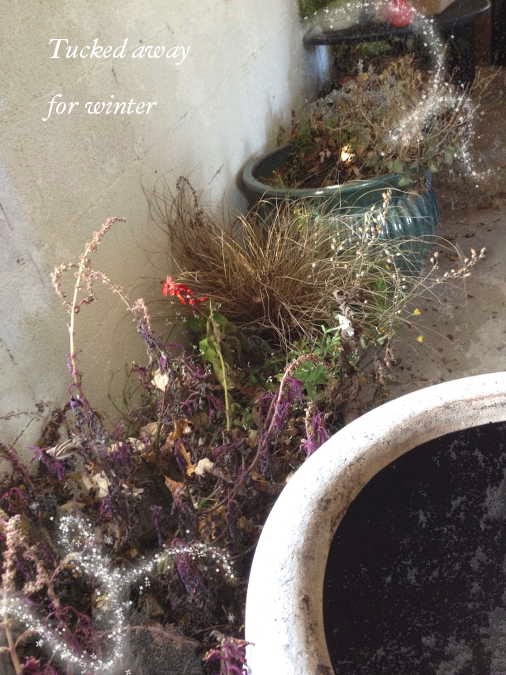 Terra cotta pots are the most susceptible to winter damage, but I learned the hard way that resin pots will also crack and suffer from ice and freezing temperatures.

After I left my urn out one winter, it filled with ice and the expansion cracked it. I repaired it (sort of) and still use it, but I wish I had been wiser and simply put it away the way I do all my pots now. 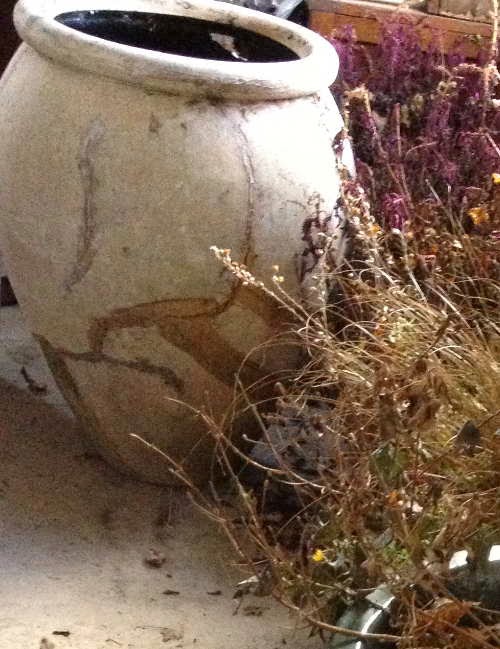 Kathy puts hers under wraps and trenches them in. I have also heeled in plants in the past. It works fairly well, but if there is an unusual cold snap without snow cover, there are some losses.

Her method would probably work for most people, and is easy and frugal.

So I’m not saying anything is wrong with wintering over potted plants that way, but for someone who lives where winds kick up as they do on the wide open spaces of the plains, with little in the way of trees, or buildings to cut the force of the wind, it doesn’t work so well. At least not for me.

It is usual in gardening for different methods for garden tasks to work out for different people. There is rarely just one right way to do anything, which is why gardening is an art, there’s a bit of your own touch and understanding involved.

Heeling In… a good old fashioned way to keep your plants over winter.
Usually it is used for shrubs or trees, but you can also use it for perennials. Most often, the containers are removed and after a trench is dug the plants are laid in at an angle, then the rootball is covered over with soil and pressed in with the heel of the foot. Then the area is mulched over with straw, or similar material like mulch. It is a temporary planting meant to be only until a gardener can move the plant to its permanent place at Spring planting time.

I don’t use leaf cover as she is doing for two reasons, however.

I have used mulch to insulate potted plants that were put into a trench. That works for me.

What doesn’t work is a basement- I always forget to water properly for a heated space like that, and there is no natural sunlight. Mostly it is my neglectfulness: out of sight, out of mind.

For now, my way of dealing with such a situation is to simply not get into it. I apply my springtime plant buying rule:

I cannot buy more plants until I have planted all of the last batch of purchases.

Of course I have my lapses, but much less guilt and extra work.

I do have an idea borrowed from a compost pile:

If you want to insulate leftover potted plants with leaves, why not make a corral of straw bales and pack leaves around the pots and on top? I think that would solve many problems except for sogginess. And because it would harbor rodents I wouldn’t situate it next to the house. However, if you had a space in a more remote part of the yard it could become a sort of compost pile area next spring.