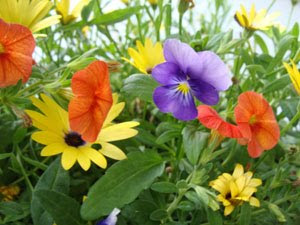 Last few days of the month mean a garden update is in order. In some ways the garden is an ogre again, but in a Shrek sort of way.

Walking around the garden and putting in two bits worth of work this last week… here are my observations:

The month has had dips and hills of temperature change, and right now it is cooler and we have had plenty of rain. It made the weeding much easier, so we cleaned up the yard in places, my kid crew and I. We have been forced to mow more than usual- and I get the complaint:” but I just mowed that two days ago” to which I reply: “yes, and go look at it… it needs it again”.

Yesterday was a birding day for me! I love to see the different varieties, and now with their citron plumage the goldfinches are apparent… one perched happily on my homemade little tripod, although they never seem to land in one place for long… and sure enough dropped quickly to the pathway where the seeds of weeded grasses surely were the fare for the moment. Then it was off to the next serendipitous meal.

A hummingbird whizzed by me… and it was a happy day.

The Japanese beetles, which in comparison to other years were not as damaging… but while I thought I had escaped their interloping, I see that they simply were smaller in numbers and more discriminating in taste. My new Japanese maple looked a bit odd, and on closer inspection I saw why! The leaves are lace and copulating beetles laze on their edges. And as usual they feast on Harry Lauder’s Walking Stick (the contorted hazel). Passing by some homes in the vicinity of my property I had noticed the telltale rustiness on some of the great Burr oaks. That means they still are eating in the area in fairly large numbers. As in the medieval prayer of old, I thank God for being spared from my insect Viking hordes.

I need to pick my tomatoes- but am sad at how they suffer from cracking this year. Next year I’ll put in a couple Better Boys for sure- they always look and taste good. I’ll still grow heirlooms and may save some seed for next years crop, but they do have a drawback in a bad year. At least Brandywine did.

I planted a ‘Jack Frost’ Brunnera– I love it! it is taking beautifully to the spot and gives me joy every time I look at it. The leaves are that Martha Stewart sort of pale gray green in a large heart shape, the whole plant a compact mound.

I had more than a few failures and disappointments in the garden. The sweet peas made absolutely no appearance under the tripod made just for their good pleasure. The crabapple trees are denuded by scab, except for some hangers on. That old fighter, Prairiefire- it resists scab to the end as much as it can; this year it was a matter of more heroism than victory. There has been more than the expected blight. The winter honeysuckle has many branches browned out that I now need to remove. The Therese Bugnet rose was hit with it, too.

There were some delightful surprises, as well, as the garden reflects God’s kindness in tempering our losses with that grace that a garden gives. Where the sweet peas did not grow I find a clematis has seeded- looks to be an autumn clematis, so I need to either situate it elsewhere or build it a proper arbor. The salpiglossis from last years containers selfseeded under a fence in rather poor, but unmown soil. To see those bright, exotically veined flowers peeking out was exciting. It doesn’t take much to excite me 😉 I also had little violas spring up in some of the containers… nice ones. I have no idea where those came from as I don’t remember planting any. and if I did and forgot – it was lovely to see their cheerful little faces peeking from among other expected flowers.”Hello, surprise! so glad to be alive”

And with that message from the violas I leave you, friends, until next time.