It has been a dry and heartless September, so what is a gardener to do? Start a new garden bed, of course. Actually, it wasn’t that blithe a decision, since I had been reducing gardened areas.

So why would I now carve out a new, quite large bed from the already reduced lawn area of the front yard?

Dissatisfaction With the Garden

I have been dissatisfied with the front yard ever since I moved here… just couldn’t get used to the way the driveway was so very long and so very strong a presence cutting right up the side of the rambling farmhouse I call home.

The plantings I placed within the “teardrop” are now too large and have never lived up to the pictures of my mind… but that is rather another story. This one relates to the spots of plantings resulting from trees planted and their necessarily mulched clearings.

Two of the trees made it, one died and left an unsatisfactory empty bed something the shape of a newly made grave. I didn’t want to sod it back up… because, well, it just goes against my nature; and I had lots of lovely daffodils in there, so in the early summer it would just be a blotch of long grass and dying daffodil foliage- NOT what one wants right smack in the front yard.

Nevertheless, I am nothing if not inventive in such situations.

I started getting a vision of how uniting this graveyard bed with the large shrub and spruce tree group would give my eye a much more pleasing axis to cut that horrible stiff straight driven driveway line. Not quite straight, which actually made it worse, but this new bed now curves away in a way that I really like. It just meant cutting huge amounts of sod.

In my old city front yard it might have been half the front yard! I can almost feel myself laugh maniacally when I think of it. Anyway, it is now fait accompli. Sod removed, ground tilled, the start of my prairie (not really prairie, but the impression of one) begins with starts of my ornamental grass…which had finally gotten settled in and was thriving.

I also chopped up the coneflowers which were really too large for their place, although I always liked the way they complemented the pyracantha. Now, however, they have full sun, and are now much more in scale with their place in the garden. I dug up some struggling Russian sage, and put that in next to the grasses, too. I am presently deciding what else to put into the bed… then comes mulch to keep the roots from heaving over the winter.
I will have to take some more pictures of the process… so you can see the puny starts of plants in their bare stretch of ground, which is always how a new garden looks here.

Here goes with the ugly process pics ending with a couple pretty things just so you know that eventually it will look nice in the end…. 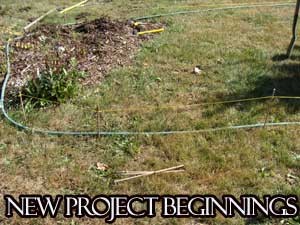 It was chilly that week, and the hose was sort of stiff, and since I was going to solicit the help of teen kids, I knew I better be exact with where I wanted those portions of sod removed. My husband kindly cut the little stakes, we staked it out ( next picture) and joined the cause.

We wanted this new bed to be parallel with the crabapple tree bed which is filled with groundcover (and from which I rescued the barely surviving Perovskia. Just goes to show you can kill almost anything with enough shade and competition. I am crossing my fingers that it will love its new place in the sun and grow well next year. The plants you see in the bed are the Shasta daisies I planted last month. 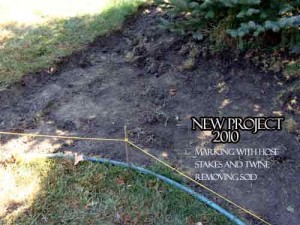 Now in the photo to the right… the sod coming out, reused in other areas that were low and uneven from the work the county did on the ditch a number of years ago ( with some going to enrich the vegetable garden, too. It was so dry that I just piled some to put into the boxes later. I also filled in the square edge of the previous bed

It was hot and sweaty work that day, but I had four very hard working family members. Thanks guys 🙂 No grumbling either… that was nice.

I promised something pretty. From earlier in the season the lovely Echinacea, which now finds itself divided into bits and pieces for a drift inside the new project flower bed.

No doubt the asters which already bloom nearby will find themselves a place inside the area. They grow like weeds around here. Right now they are the only real source of color in my garden as we are in October already.

Now that I think about it, I will maybe not transplant anything more and wait til next spring. Although it might be a good idea to strew in some hardy annual seed to fill in until the perennials take hold.

Next, I will need to tell you about the gourds. I have LOTS of gourds.